We’re back home after a nearly 3 week trip to Malaysia for Chinese New Year. I was so nice to see family and friends again, and of course to eat all the wonderful foods we’ve been missing. We didn’t get to them all, but not for lack of trying! Seriously, some days it felt like we were constantly eating. (If you’re a fan of our Facebook Fan Page, you would have seen some of the things we ate.)

In addition to eating food we can’t get here in America, we also brought back some Malaysian foodstuffs that we can’t find here. Want to see some of what came back in our luggage? 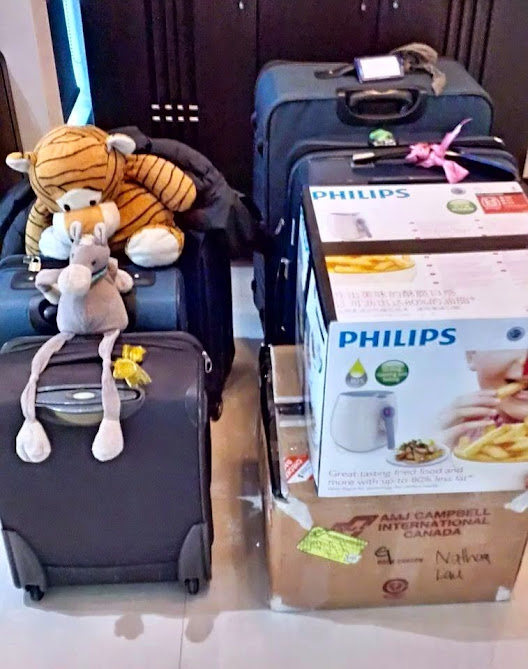 END_OF_DOCUMENT_TOKEN_TO_BE_REPLACED

I really didn’t feel like cooking last Thursday. It was one of those days when I just felt lethargic, and didn’t have any mood to do much. The day had started with rain and then more rain. The whole morning was dark and gloomy and by the time the sun deemed to peek out, it was already mid-afternoon. Somehow the weather just made me feel very unproductive. Or maybe it’s that one-month mark of being here…feeling not quite like this is home, missing California and feeling somewhat homesick (which is strange because I am Malaysian after all).

So when it came time to prepare dinner, I just didn’t have any energy to do it. I called Nate at work and told him that we’d have to eat out and get some food to go. He tried to convince me that we had enough food at home to make something and maybe we could just pick up a roast chicken or something to go with it. I tentatively agreed but I still wasn’t really feeling it. I was just not wanting to cook anything at all.

Then, it struck me. In all the chaffeuring I had been doing sending Nate to and from work, I passed by this Ramadhan Bazaar at Stutong Market almost every weekday. And almost everytime we passed it on the way home, I would say to Nate, “we should stop by one day and pick up dinner from here before the Ramadhan (fasting) month is over.” And by Thursday, the fasting month was quickly coming to a close; Aidil Fitri would be celebrated on Sunday. So I called Nate back and said, “let’s go to the Ramadhan Bazaar and pick up some dinner there instead!” He thought it was a great idea and so that was where we headed after work.

END_OF_DOCUMENT_TOKEN_TO_BE_REPLACED

On Christmas Day, we went to downtown San Jose to catch a movie. Coming out, we were a bit hungry. But there weren’t many restaurants open on Christmas Day down there. The only two we found within a couple of blocks of the theater was McCormick & Schmick’s Seafood, and The Grill. Both are on the $$$ side but we weren’t feeling like meat so we chose M&S.

The place was busy but we were seated right away. Their menu was simple – a large page of mostly seafood. Annie went for the skewer of grilled shrimp and scallop while I went for the cedar plank salmon.
END_OF_DOCUMENT_TOKEN_TO_BE_REPLACED