Okay, so I know that bacon is *so* 2009, but seriously, these bacon-wrapped chicken lollipops are too good to ignore. And they’re so easy to make, too! 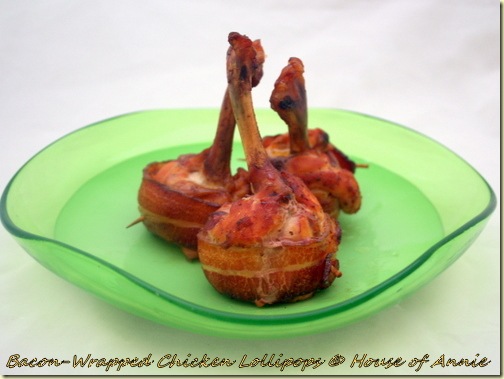 Living here in Malaysia, we don’t get to watch much American football anymore. Truthfully, I haven’t been that big a fan of professional football to begin with. Like Annie, the only reason to watch the SuperBowl was for the ads, and for the SuperBowl get-togethers. I mean, where else are you going to find so many great hors d’oeuvres?

A Different Kind of Appetizer

Chicken lollipops start with the drumette section of a chicken wing. The flesh is separated and scraped down toward the “shoulder” end of the wing, creating a ball of chicken meat at the end. It ends up looking like an inverted, chicken “Chupa Chups”.

If you’re lucky enough to have a grocer with a properly staffed butcher department, you can just ask them to prepare the chicken drumettes for you. But if not, the steps for preparing the chicken lollipops are quite simple. You can follow the instructions for “How to Make Chicken Lollipops” on Just Bento.

Most recipes for chicken lollipops will have you deep frying or baking them. We wanted to try smoking them on my WSM, which is why we settled on the “Cackalacky Chicken Lollipop Recipe” to riff off of.

2. Wrap the ball of the “lollipop” with a strip of bacon and secure it with a toothpick. 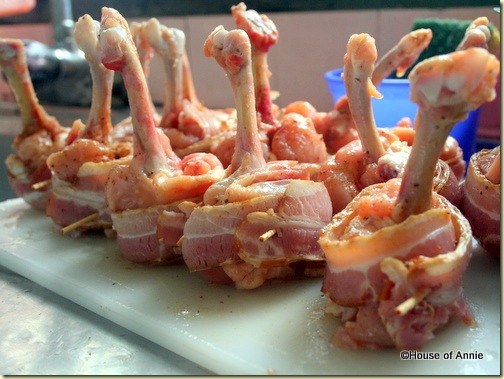 3. Start your smoker and bring the temp up to 250*F. Toss on some of your favorite smoke wood for chicken (apple is good).

4. Arrange the lollipops on the grate so that they don’t crowd each other. (Notice that green lollipop on the right? I ran out of bacon slices so I decided to wrap one of the lollipops in pandan leaf and see what happened!) 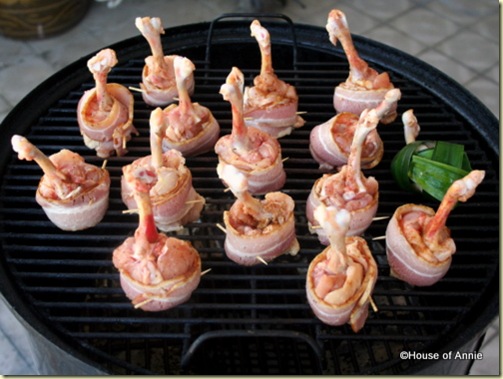 5. Smoke the lollipops for 1-1/2 hours at 250*F. At this point, the juices of the chicken should run clear if pricked with a knife. 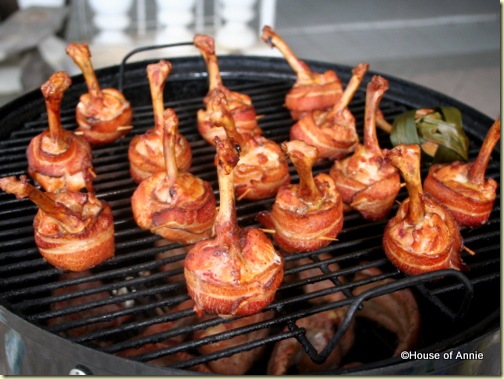 6. The Cackalacky recipe calls for the chicken to be glazed with their special sauce, then finished for another 15 minutes in the smoker. (I had run out of time so I skipped this step and just pulled them at 1.5 hours.) 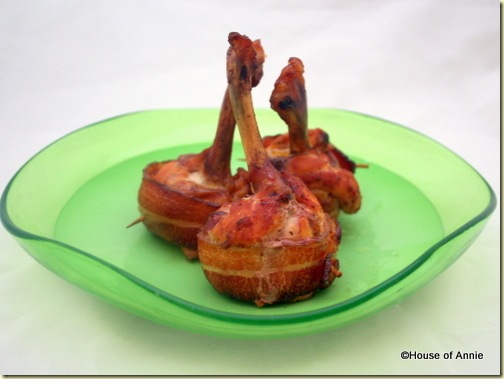 We brought these chicken lollipops to a dinner party in the evening. The smoky aromas exuded by the bacon and the chicken started them salivating. When we unveiled the dish, people went, “ooh, what is that?!”

The chicken was cooked just right – still retaining the juiciness of the bird. I thought it could have used a little more spicy heat, like maybe some cayenne or black pepper. Annie thought that it would have been better with a sweet chili sauce glaze. Still, nobody complained and before you know it, they were all gone.

(P.S.: that pandan-wrapped chicken was all right. I thought it would have been better deep fried.)

What are YOU making for your SuperBowl party? Leave a comment and tell us about it!