Waldorf salad is one of my favorite salads. I like its combination of sweet, savory and tangy flavors, and crisp and bursty textures. We took a winning Waldorf salad recipe and stood it up on its head. 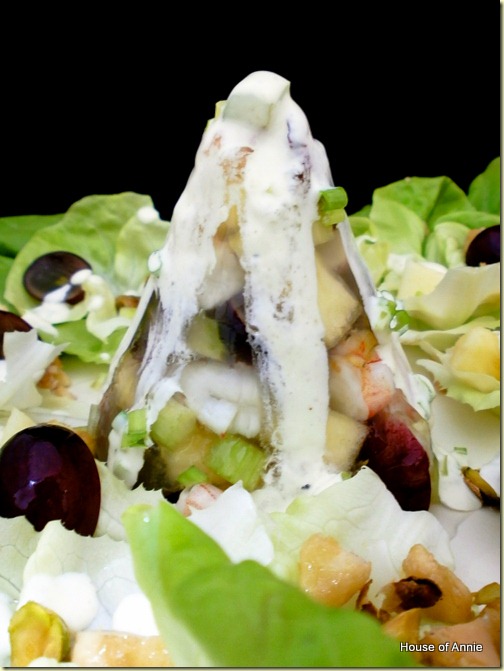 When we were brainstorming ideas for the Royal Selangor Jellyriffic Challenge, Annie suggested making a Waldorf salad in jelly form. As she described it to me, at first I was skeptical. But the more the idea turned over in my head, the more I warmed up to it. Plus, I love puns: standing the Waldorf salad up turns it into a “Tall-dorf” salad 😛 ! So I agreed that we should do it.

We decided to make this salad this weekend. We bought all the ingredients from the market yesterday, and put it together this morning before heading out to church. We basically followed the recipe from our Chopped Shrimp Waldorf Salad Recipe.

I started out by quickly boiling some peeled shrimp and rinsing them in cold water. Then I chopped the shrimp into large dice. I also diced up a rib of celery and halved a couple cups’ worth of red grapes. Finally, I peeled and diced a Fuji apple.

Annie arranged all these chunks evenly inside each Royal Selangor Jelly Mould. I made up a quick gelatin solution with water and freshly squeezed lemon juice. After Annie had tightly packed the ingredients in the moulds, I slowly poured the gelatin solution over the salad until it reached the brim. Then the moulds went into the fridge to chill for 4 hours. 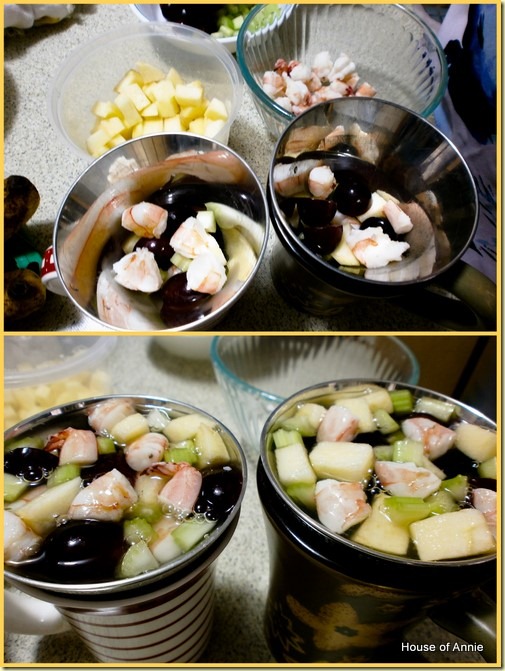 When we came back home, the gelatin had set. All we had to do was peel and wash some butter lettuce, chop up some macadamia and pistachio nuts, and prepare the dressing. The dressing recipe called for buttermilk, which we didn’t have, so we substituted with yogurt instead.

Annie arranged the lettuce, nuts, and leftover grapes and apples on a plate before we unmolded the salad in the middle. Next she drizzled the dressing on top of the Tall-dorf and over the surrounding lettuce. Finally, we garnished with some chopped green onion. 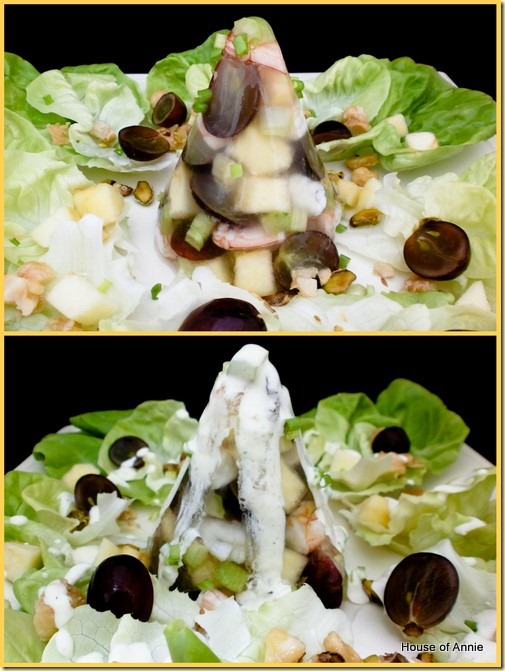 After I was done taking pictures, we ate the salad for lunch. Let me tell you, it was very good! All the flavors worked so well together. As we attacked the standing salad, the gelatin melted and mingled its lemony flavors with the dressing.

I would have to say that this was probably the best dish we made using the jelly moulds this weekend – even better than yesterday’s otak-otak! It was pretty quick and easy to put together. I kept thinking of different ingredients and flavors that we could use to make more tall salads, like capers or curry powder. It just goes to show that this kind of salad is open to interpretation and ingenuity 🙂

Breast cancer fact: Breast cancer in men is very rare, but it does happen. The biggest issue is that it is a largely unexpected disease … and it’s not something that’s being looked for.