Which of these ribs scored the most points in our Ultimate Rib Showdown? 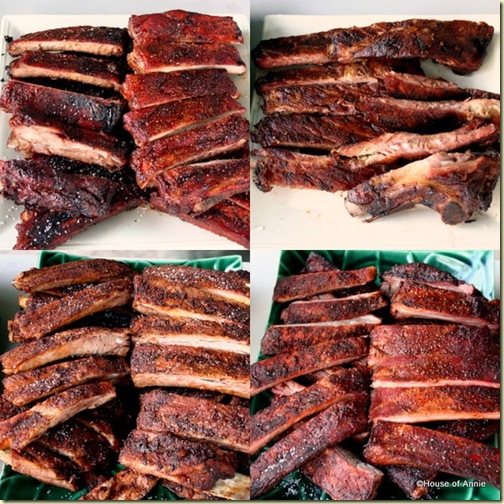 The Ultimate Rib Showdown was all about finding which method of cooking turned out the best tasting pork spareribs – Boiled and Baked, Grilled, or Smoked.  I used the same rib rub recipe on all three cooks.  I also bought a slab of ribs from Texas Smokehouse BBQ, a local barbecue joint, to serve as a “standard” or “reference point”.  Then we invited ten of our friends, including FoodGal Carolyn Jung and Michael Chu from Cooking for Engineers, to come, taste and score the ribs.

Each rib would be scored on a scale of 2 to 9 in the categories of Taste, Texture, and Tenderness.  They would be scored according to how each taster felt about them individually (not comparing one rib to another). Here’s how they scored:

And it is very interesting to note that Boiled and Baked came really close to beating out Grilled. 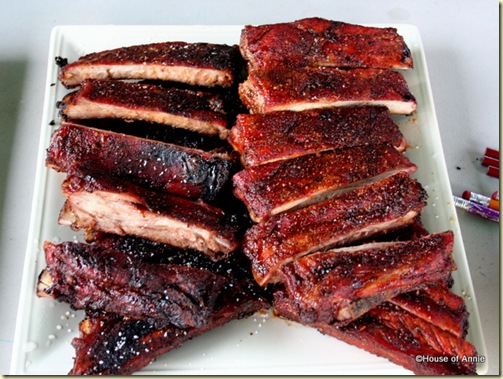 Scoring was all over the map.  Diners A and C scored these the lowest, even under Texas Smokehouse. But Diners M2 and S scored these the highest.  The rib rub I used was originally meant for grilling, and meant to be served with a sauce.

Personally, I liked how these ribs turned out, especially the bark. But they took almost as long to cook as the smoked ones, and those foil packets of smoke chips didn’t add very much smoky flavor to these ribs.  I missed that smokiness. 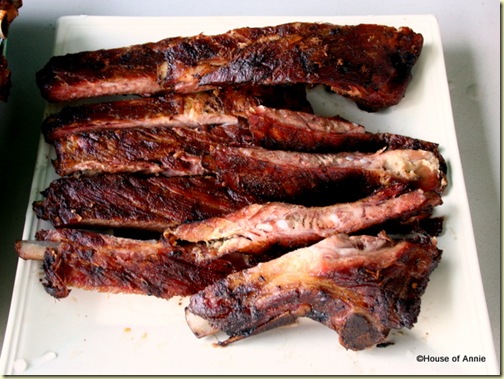 I’ve had really good ribs in Texas. While these ones from Texas Smokehouse BBQ may have the same texture as those from Williams Smokehouse, they are nowhere near as good.  Almost everyone scored Texas Smokehouse the lowest.

When Diner M2 was tasting and scoring these ribs, he looked up and exclaimed, “why did you do this to me!?”  As soon as Diner A bit into them, he knew they came from Texas Smokehouse BBQ.  “They have the same chemically taste as the first time I had them.”  What chemically taste, you ask?

Texas Smokehouse BBQ’s cooker is right outside their front door, facing the street.  You can’t miss it.  You also can’t miss seeing that they are using Kingsford charcoal briquettes and lighter fluid instead of wood logs or lump charcoal. A sure sign of cutting corners.  Listen, if you see someone grilling or barbecuing, and a bottle of lighter fluid is nearby, DO NOT EAT THE FOOD.  It’s just not going to taste good.

One other thing.  Texas Smokehouse BBQ has a solid 4-star rating on Yelp.  Makes me wonder what good these ratings are if people don’t know what good ‘cue tastes like in the first place. 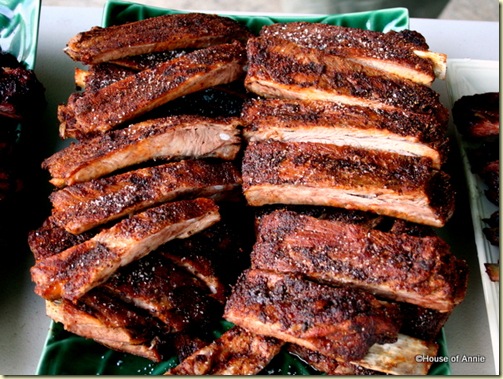 My barbecue purist instincts have kept me from making boiled and baked ribs ever since I started cooking ribs.  I turned up my nose at any restaurant rib that I knew wasn’t cooked in a smoker.  For me, if ribs didn’t spend at least 3 hours cooking in wood smoke, it wasn’t barbecue.

But, I realize that some people don’t like to wait that long to eat. Some people are perfectly fine with boiling away flavor as long as the meat gets tender. You can replace that lost flavor by drowning your meat in sauce.

Even though I didn’t bake these ribs in sauce, they still came out tasty.  The paprika and the sugar in the rub combined to make a sticky outer coating for the ribs.  Diner I scored these ribs the highest. 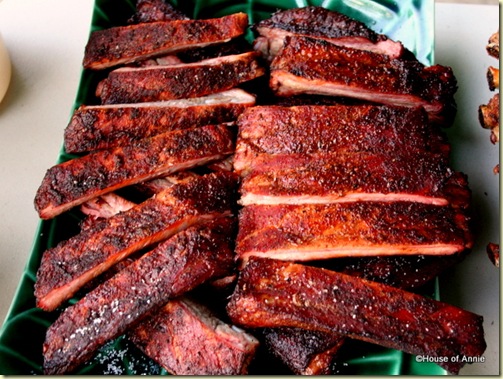 Both 8Chocolate and Thom guessed it right.  The Smoked ribs came out on top (as I hoped they would).  None of the other methods could match the depth of flavor that cooking in wood smoke brings.

The only downside I could see was, the smoke overshadowed a lot of the subtler flavors in this rub.  Of course, this rub that I used wasn’t made for smoking.  While I smoked four slabs of ribs using this rub, I also smoked another two slab of ribs using my tried and true salt and pepper rub.  The smoke complements the flavors in the salt and pepper rub instead of competes with it.

I think I accomplished what I set out to do, which was to compare the different rib cooking methods in as fair a way as possible.  There were some glitches along the way (like leaving out the salt!) but I got a definitive answer, one that I am happy with.

I wish I could say that.

But some people (like those living in condos in California) cannot have charcoal burning smokers or grills on their wooden decks.  Some people can’t afford a smoker, even if they could have one.  Some people don’t want to wait that long to get their barbecue fix.

The rest (smoke/no smoke)is a matter of taste.
One could do BBQ over wood coals and screw it up with a bad rub and/or bad sauce.

Some people don’t like smoke. Some people love sauce on their ribs.  It’s a matter of taste.

Also, I myself have ruined a batch of ribs by oversmoking them, or by screwing around with the rub too much.  Smoking by itself isn’t going to make a good rib.  It’s the care one puts into the cooking that makes the difference.

I just happen to care about making great barbecue.

So, go ahead and boil and bake and grill your ribs to your heart’s content.

What’s a barbecue without sides to accompany the heavy meats?  Each of our guests contributed a dish to the party: 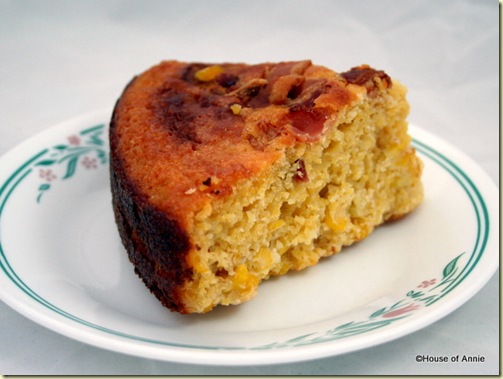 Annie made this cornbread using a recipe from Peter Reinhart’s “The Bread Baker’s Apprentice”. The polenta soaked in rich, tangy buttermilk overnight, adding a delicious, sour bite to the cake.  Of course, the addition of bacon on top doesn’t hurt.  We will blog this recipe for cornbread in another post. 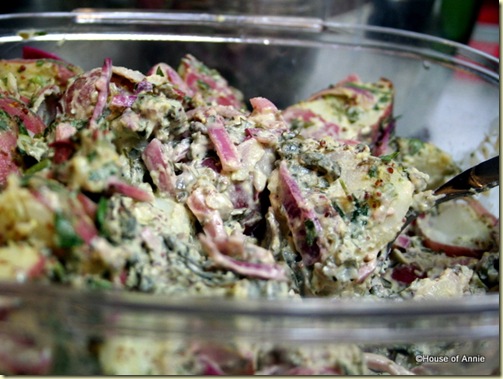 FoodGal Carolyn brought a sublime potato salad from a “certain restaurant in Yountville” (no, not that restaurant).  Utilizing Dijon mustard as well as whole grain mustard, plus fresh chopped tarragon and capers, I believe this recipe comes from Gordon’s Cafe and Wine Bar.  The recipe is featured in the Williams-Sonoma San Francisco Cookbook by Janet Fletcher. 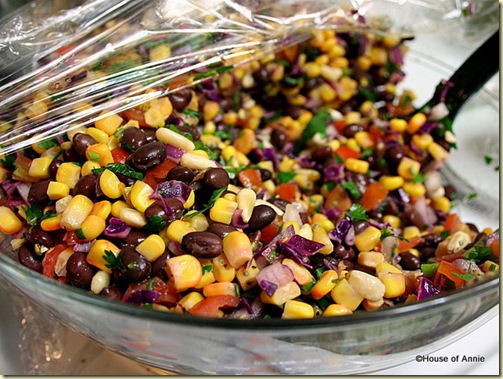 Our friend Betty brought a beautiful bean salad to the party.  Among the surprising and tasty ingredients were chopped red cabbage and pine nuts.  It would be perfect for a summer picnic.  If Betty would share the recipe with us, I’m sure we’ll make it again and blog about it too! 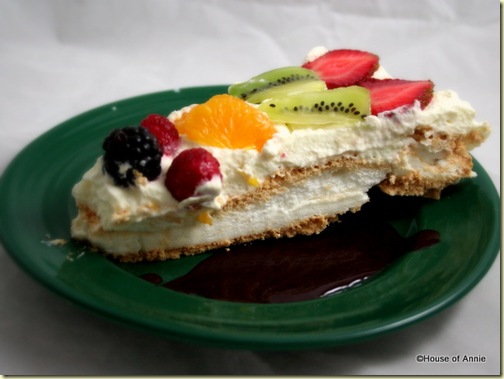 Our friend Felicia brought over two different pavolovas for dessert.  The baked meringue was crisp and airy on the outside while the inside remained soft like a marshmallow.  Here, the classic strawberries and kiwis were paired with sweet mandarin sections and fresh berries.  I don’t have a good pic of the other pavlova, but let me tell you, it was equally as good.  I hope we can get the recipe from Felicia to share with you all.

Thanks to all our guests that night who made the party so fun and memorable.  Thanks also to Foodbuzz for giving us the opportunity to do this as a 24, 24, 24 event.  Hopefully we can do more fun parties like this in the future!