I loved this carrot cream cheese cake so much after tasting it, I made it twice in a row! 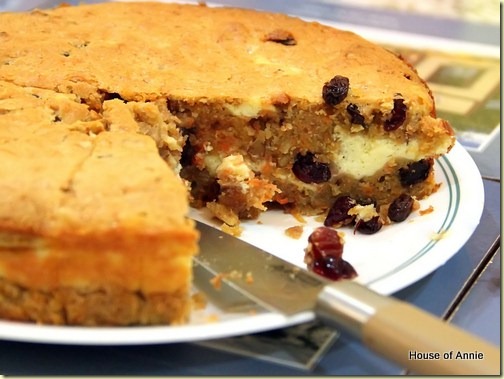 Recently, I finished a book called “Eat Cake: A Novel” by Jeanne Ray and it was a fast and easy read. Being a baker myself, I enjoyed the main character’s love of baking. One particular portion of the book resounded with me and I actually highlighted it because I agreed with the sentiment of it. I will quote it here for you:

“Cakes have gotten a bad rap. People equate virtue with turning down dessert. There is always one person at the table who holds up her hand when I serve the cake. ‘No, really, I couldn’t,’ she says, and then gives her flat stomach a conspiratorial little pat. Everyone who is pressing a fork into that first tender layer looks at the person who declined the plate, and they all think, ‘That person is better than I am. That person has discipline.’ But that isn’t a person with discipline, that is a person who has completely lost touch with joy. A slice of cake never made anybody fat. You don’t eat the whole cake. You don’t eat a cake every day of your life. You take the cake when it is offered because the cake is delicious. You have a slice of cake and what it reminds you of is someplace that’s safe, uncomplicated, without stress. A cake is a party, a birthday, a wedding. A cake is what’s served on the happiest days of your life.”

I couldn’t put it any better. As someone who bakes, I love to share my cakes with others. Part of the reason I bake is to see someone else biting into my cake and then seeing the look of enjoyment on their faces as they taste the love and care that went into the baking of the cake. To see the affirmation that what I baked was worth it, that it was delicious and comforting. This is why I would never malign anyone who offers me a home-baked piece of cake even if I didn’t like it very much (though I seldom find home-made cakes to be bad).

Don’t be a Hater

It was moist without being overwhelmingly so, sweet without being cloying, with just the right amount of tang from the cream cheese that was hidden within (yes, it was not covered in cream cheese like most carrot cakes, but had it layered between the cake).

I LOVED that cake and immediately asked for the recipe which she graciously shared with me. And she was so happy that I enjoyed her cake so much.

I returned home and raved about it to Nate telling him that it was a cheesecake with carrot in it which made him sniff and say, you’re trying to cover that it’s a carrot cake. Undaunted, I set about getting all the ingredients and then baked it not just once, but twice, over a period of three days.. 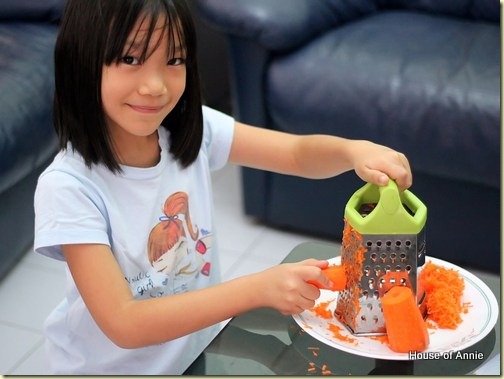 The first time, I made it for guests who came to dinner, and the second time, I made it to bring to a friend’s house for a party. Nate took a slice the first time, and didn’t say very much. The second time, at the friend’s house, he took another slice and then said, “I like it very much and even though it’s a carrot cake, I must say that it’s very good.”

Wow, what a concession!

This cake is a really dense cake which doesn’t use any leavening ingredient other than the creaming of butter, sugar, and eggs. Everything else (the grated carrot, cranberries/raisins, nuts, flour) is just folded into the dough and then baked. Though dense, the cream cheese adds the tangy element that balances out the rest of the ingredients. I never have problems finishing off a slice of this cake. Once you take that first bite, you just cannot resist the rest of it.

Method:
1. Preheat oven to 350 F or 170 C.
2. Cream butter & sugar till fluffy then add eggs one at a time, scraping down after each egg.
3. Fold in flour to mixture, add in chopped walnuts, raisins, grated carrots & cinnamon and mix well. 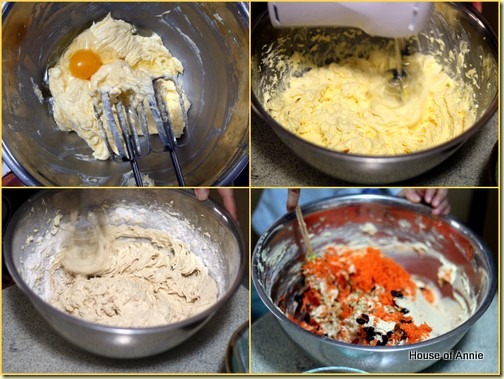 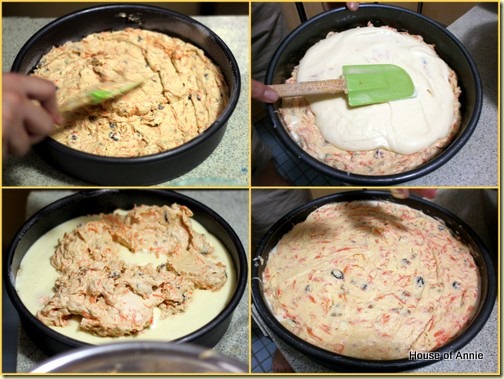 6. Bake for about 50-55 minutes or until cake tester comes out clean.

A few observations I have made after baking this cake for several times:

1. If you like your cake to be very moist, use the fine grater when you grate the carrot for this cake. That will make the cake texture more fine and moist. If you like a cake with more of a crumb, use the large grater to grate your carrot. This will give a drier consistency (still moist but maybe less fruit-cake like in texture).

2. Even though the original recipe calls for only 150g of cream cheese, you can use the whole 250g block which will give an even better balance of tangy-sweet flavours (if you want to save the rest of the cream cheese for your bagels, that’s fine, but for me, if I leave some cream cheese behind, I inevitably end up tossing it as I don’t use it plain for much else).

4. Be careful not to overbake. If you overbake, the cake won’t get dried out but the texture of the cream cheese portion will become less creamy. 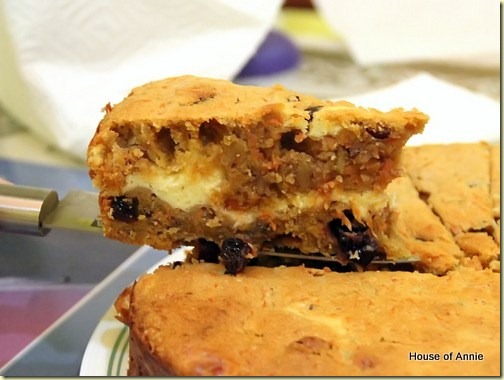 Have you ever had a dish that you initially hated, but now love? Leave us a comment and tell us about it!

For its use of carrots, I am entering this post in the Weekend Herb Blogging roundup, organized by Haalo and hosted this week by Fragoliva.

Check out these other carrot cake recipes: