Thanks to food-loving friends who took us around Petaling Jaya and surrounding areas, we sometimes felt like Hobbits with all the eating we did while in KL recently. Our only quest: to satisfy our hunger. 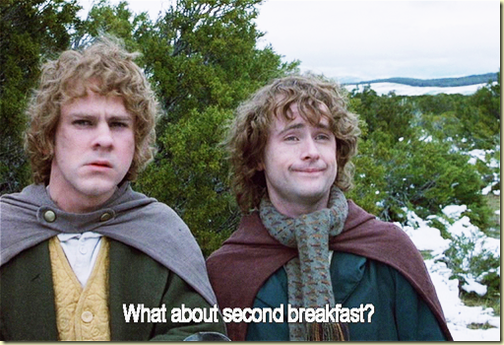 One of the KL foods we miss is bak kut teh or pork bone tea. The nearby city of Klang is famous for it, with hundreds of bkt shops operating there. When most people think of Klang bkt, they expect it to be served in a clay pot, swimming in dark, soy-based broth and served with veggies, tofu and shiitake mushrooms, with lots of chopped raw garlic on the side as a condiment. But our foodie friend told us that this wasn’t the “real” style of bak kut teh from Klang, and promised to take us to his favorite restaurant in Klang for some authentic bkt.

This restaurant, in the Taman Berkeley area of Klang, doesn’t have all those “extras” like the claypot restaurants. Their bkt is purely meat and (very little) broth. We even had to buy our own you tiau from a stall on the way there! 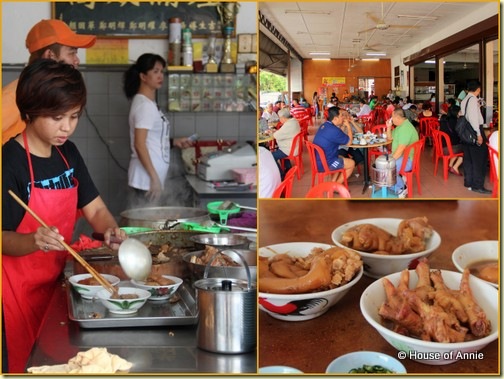 We got four plates of rice to go along with the bowls of pig trotters and chicken feet we ordered. The meat was falling-apart tender from the long hours of braising, and you could really feel the stickiness of the collagen on your lips after eating it. Delicious. Honestly though, we like the “typical” style of Klang bkt just as much.

One interesting thing I hadn’t seen before is that patrons bring their own loose leaf Chinese tea to add to their teapots, rather than drinking the tea served by the house. It’s neat because people can drink the tea they want instead of choosing from the house options.

Some other reviews of Ah Her BKT by VKeong, Lingzie, and Small Kucing

After our late breakfast of bkt, our friend took us back to his own neighborhood of Subang Jaya for something cool and sweet at Snowflake Taiwanese Desserts.  He had taken us there on a previous trip and we were craving it again. These desserts are made with sweet flavored ices, shaved thinly and topped with different condiments like red bean, tapioca pearls, taro balls, or boiled sweet potato. 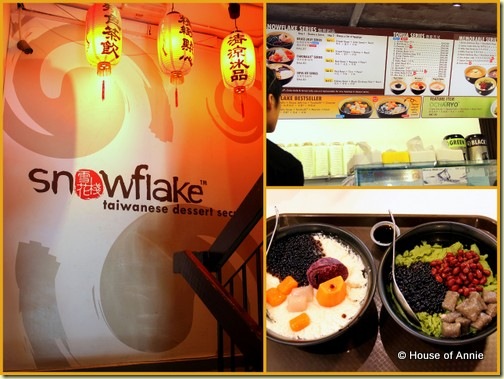 These dishes were larger and more substantial than any Hawaiian-style shave ice cone. We shared both bowls between the five of us. I enjoyed the big pieces of sweet potato and the springy-chewy taro balls. After that, though, we were too full for lunch or even afternoon tea.

Other reviews of Snowflake by Tummy Rumble, My Taste Heaven, and Live to Eat

But we weren’t too full for some Shanghainese cuisine for dinner. We made arrangements to meet with a couple of Annie’s cousins for dinner at Dragon-i in the 1Utama MegaMall. Our reservations were for 8 PM – rather late by Kuching standards but standard for KL. The restaurant was full but they were able to seat us right away.

By the time the cousins arrived, we were starving and had actually gotten started on some dishes. This being a Shanghainese restaurant, we of course ordered some Xiao Long Bao. We also got some other pan-fried dumplings, a couple of bowls of hand-pulled la mian noodles, some cucumber pickles, and a lot more (did I mention that we were starving?). 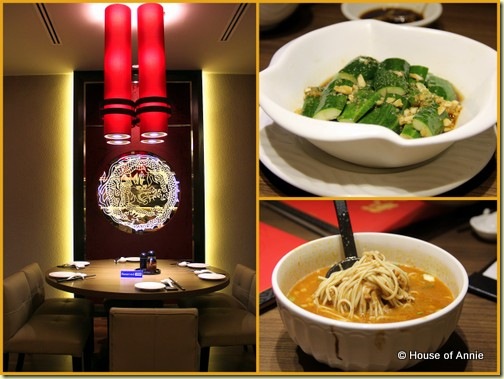 While waiting for our order to arrive, I took the opportunity to capture a video of the cooks hand-pulling the la mian noodles in the glassed-in kitchen:

If there is a cuisine that doesn’t seem to be very popular in Malaysia, it would be Mexican food. Which is sad, because I happen to love Mexican food and think it’s one of the great cuisines of the world. We had access to some good ones in the San Francisco Bay Area when we were living there. There’s nothing remotely like that here in Kuching, which is why I had to make do with my own homemade fajitas a few months back.

So I was glad when I saw a review by Caroline May Ling of a new Mexican restaurant that had opened up at the Gardens at Mid Valley called Fresca Mexican Kitchen. The review focused a lot on the mixed margarita drinks available, but the food looked better than the usual pseudo-Mexican fare commonly found in other family chain restaurants in KL. When one of our friends asked about where to go for lunch, I readily suggested Fresca.

Mid Valley Mall is a very big shopping complex with lots of high-end stores. It took a while to find parking and then to even find the restaurant, but we eventually got there a little after the lunch crowd had left. We were seated right away.

We went for some of the set lunch specials, including beef burritos, chicken enchiladas and chicken fajitas. Daniel got a mac-and-cheese off the kids section while Esther got a fish and chips. We also shared a quesadilla plate. Drinks came with the set lunches but I also got a classic margarita. 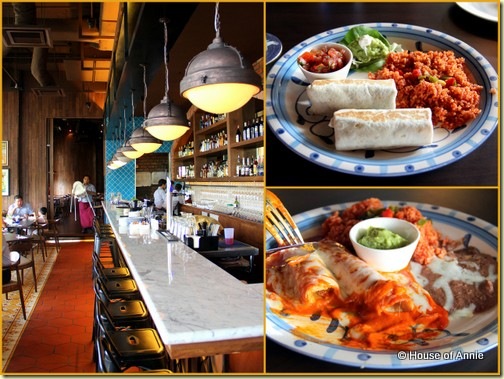 Overall I found the food to be fairly authentic in flavor compared with what I had in the US. My burritos were smaller than I expected, but still delicious. My margarita hit the spot. Annie enjoyed her chicken enchiladas. Daniel devoured his mac-and-cheese. Our friend’s fajita platter was pretty substantial, but did not come with enough tortillas.

The wait staff were helpful and attentive and the ambiance was nice. The only problem I have with this restaurant is the price. I could not believe how expensive the dishes were – 28 ringgit for a simple quesadilla is ridiculously high. But I guess if you’re the only game in town, located in a high-end mall, you get to set your prices as high as people are willing to pay.

Other reviews by Masak-Masak and Baby Sumo

Our friends wanted to take us out for one last dinner and gave us a choice of Chinese (nah), Thai (mmm, nah), Belgian sausage (hmmm…) or Italian (yes!). I felt like I had to turn down the Belgian sausage as we were having too much meat on this trip. Also, we can get decent pork sausage at My Restaurant in Kuching but good Italian food is hard to come by.

We ended up at Pizza Uno which had recently opened in a new location in the TTDI neighborhood of Petaling Jaya. Our friends made the reservations and came to pick us up for another late evening meal. We were seated right away and handed our menus.

We were feeling quite hungry, so everything looked good. We ordered some appetizers such as mushroom soup (very good), bruschetta (nice), an Italian salad (over-dressed) and clams in white wine (beautiful). We also got a couple of “half-and-half” combo pizzas: Bianco – smoked chicken with mushrooms (really good) / Sicilian – pepperoni, tomatoes and basil (nice) and Margherita (cheesy) / Al Funghi – mushrooms, parmesan and anchovy (tasty!).

We also ordered a Napoletana pasta (a bit sweet for me), and a braised lamb shank dish (don’t know – too full!). For dessert we shared a tiramisu cake (decent) and I got myself an affogato (okay). 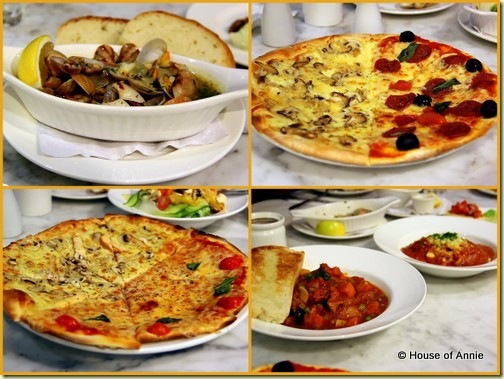 That was a serious amount of food and we were quite stuffed. Too stuffed to go out for late night mamak, even.

One thing we always have to eat when we are in KL is wantan mee. Our favorite place to go is Restoran Okay in the Chow Yang neighborhood of SS2 in Petaling Jaya. Annie’s dad brought us there for a late lunch on the last day of our trip.

While most of the other stalls at this kopitiam had already shut down and closed up, the wantan mee stall was still going. Our dishes came in short order and we devoured them quickly. The egg noodles, simply tossed in sweet soy sauce and served with char siew, delicate wantans and blanched veggies, were simply satisfying. 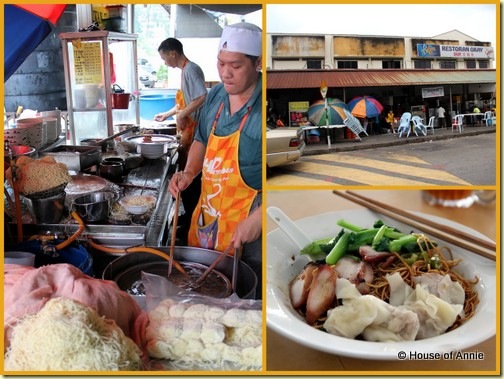 After that, it was time to go back home to pack up all our stuff and take the cab to the airport.

So in addition to all that eating, we did manage to get some shopping done. We spent some time at 1Utama Mall buying clothes for the kids. For ourselves, though, we somehow ended up buying more food to bring back.

Annie the tea lover brought back some lovely (and expensive) teas from the TWG Tea shop at the Pavilion Mall. We also found some Choya umeshu (honey plum wine) on sale at one of the Tokyo Street stores on the top level of Pavilion. In Subang Jaya after the Taiwanese desserts, Annie stopped at a roadside stall to buy packages of muruku – fried Indian snacks. Annie’s friend also brought her a whole large container of a different kind of muruku. 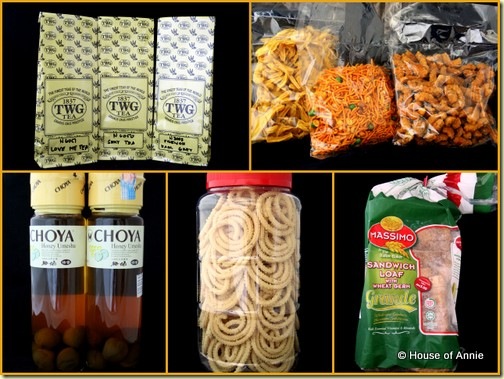 The strangest thing we came back with, though, was a couple loaves of Massimo brand whole wheat sandwich bread. You might be thinking, “who in their right mind brings back bread in their luggage?” Well, actually some people do that because we can’t get this brand of bread here in Kuching. It’s nicer and also a better value compared to the breads we buy at the bakery shops here.

What strange or funny things have you brought back home from your travels?

It’s really nice to be able to go to KL, catch up with friends and family, and eat all the kinds of food we haven’t been able to get. But it’s also nice to get out of KL with its traffic, higher crime rate, and pollution and come back to comfortable Kuching. In the end, a Hobbit is happiest at home. 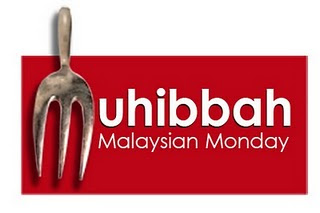 I am entering this post in the Muhibbah Malaysian Monday roundup, hosted this month by Suresh from 3 Hungry Tummies.

13 thoughts on “KL and Back Again”