One of our most loved Thanksgiving recipes, a tried-and-true favorite stuffing dish. You’ll want to make a double batch just so you have enough for leftovers! 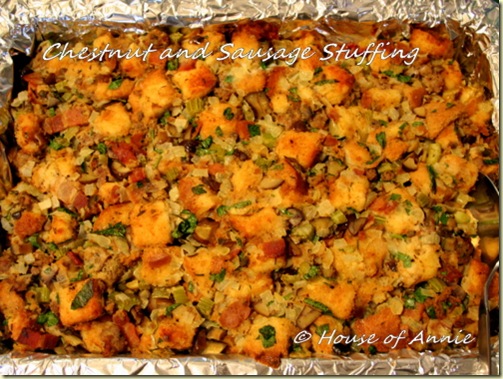 Over the years, we’ve made many different turkey recipes for Thanksgiving. The famous Good Eats Roast Turkey by Alton Brown was the most often used recipe. We’ve also used other recipes, like Melinda Lee’s apple juice-based Master Brine, our WSM Smoked Turkey, and a disastrous pineapple brined, smoked turkey (shudder).

For the centerpiece of the Thanksgiving meal, we like to try different things out. But one side dish has been a constant companion on our Thanksgiving table, for at least 5 years now: this Gourmet Chestnut and Sausage Stuffing.

Chestnut and Sausage Stuffing Thru the Years 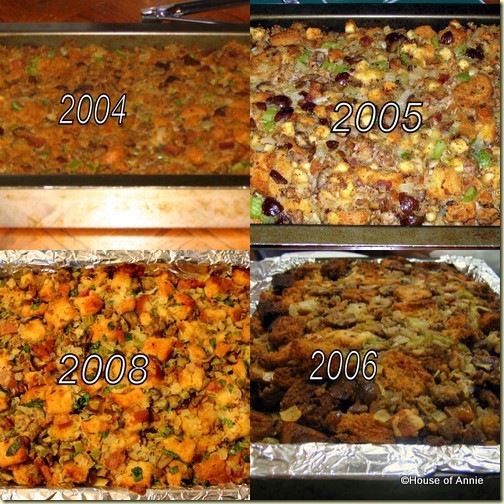 Annie loves roasted chestnuts. Their complex sweetness adds a delicious oomph to many dishes, both Asian and Western. We can easily find packages of peeled, roasted chestnuts in our local Asian grocery. Then it’s just a matter of chopping them up at home to use in the stuffing recipe. 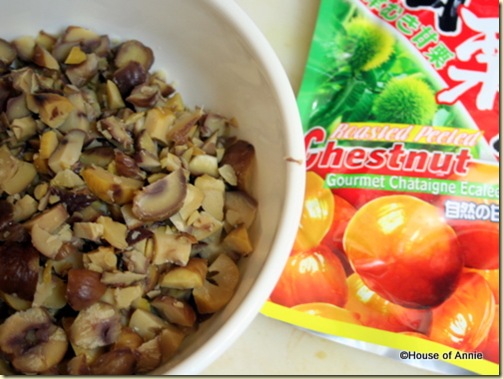 2. Spread bread cubes in a large shallow baking pan (1 inch deep) and bake in lower third of oven until completely dry, 25 to 30 minutes. Cool in pan on a rack 10 minutes. (Leave oven on.)

3. While bread bakes, cook bacon in a 12-inch heavy skillet over moderately high heat, stirring, until crisp, about 10 minutes, then transfer with a slotted spoon to a large bowl.

4. Pour off and discard all but 2 tablespoons bacon fat from skillet, then sauté onions in fat over moderately high heat, stirring and scraping up brown bits, until softened, about 10 minutes. Add celery and sauté, stirring, 3 minutes, then transfer vegetables to bowl with bacon. 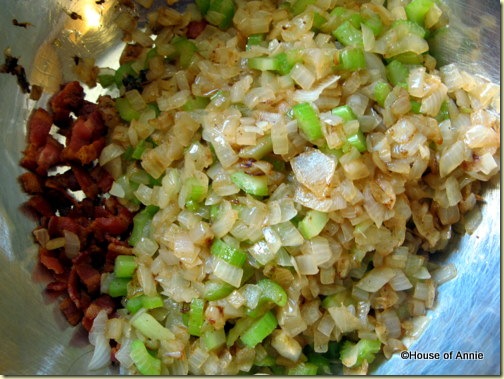 5. Cook sausage and liver (if using) in skillet, stirring and breaking up sausage with a fork, until meat is no longer pink, 8 to 10 minutes, then transfer with slotted spoon to onion mixture. 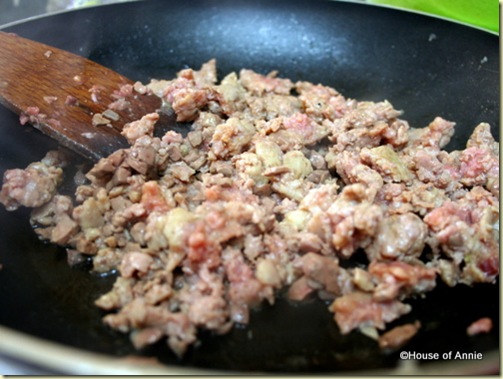 6. Pour off any remaining fat from skillet. Add Cognac (off heat), then deglaze skillet by simmering over moderate heat, stirring and scraping up any brown bits, 1 minute, and add to sausage mixture.

8. Soak bread cubes in half-and-half in a bowl, tossing frequently, until liquid is absorbed, about 15 minutes. Gently squeeze excess liquid from bread, then stir bread into sausage mixture, discarding remaining half-and-half. Stir together stock and eggs and add to stuffing, then stir in chestnuts, herbs, salt, and pepper until combined well. 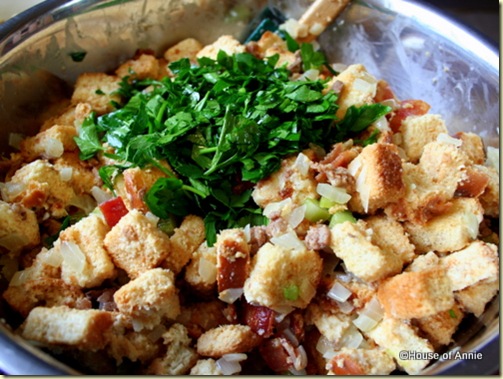 9. Transfer stuffing to baking dish, press it down flat, and cover with foil.

Smoothing the Stuffing Down Flat 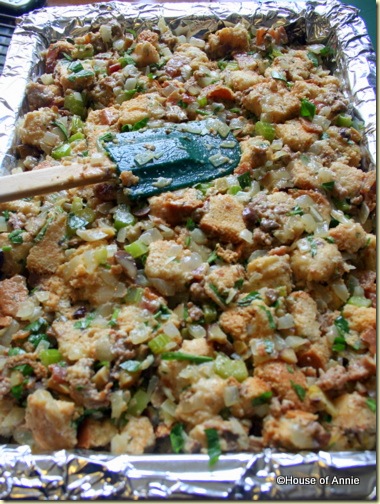 10. Bake in upper third of oven 20 minutes. Remove foil and bake until top is crisp, about 20 minutes more.

I just love how all the flavors meld together so nicely. The sage and the celery just go so well with Thanksgiving turkey. I totally have to stop myself from taking more than 3 helpings at the table. Otherwise, there’d be none remaining for leftovers.

And we all know how good leftovers are, right?

This post was entered in the Yeastspotting roundup for November 27.