Today’s creation for the Royal Selangor Jellyriffic Challenge is something near and dear to my heart: Spam musubi. Being from Hawaii, I grew up eating these all-in-one meals. We still do make Spam musubi here in Kuching, from time to time, breaking into our supply of Spam that my Mom thankfully brings each time she visits (Spam being substantially cheaper in Hawaii than anywhere else). But we haven’t done it lately, so this challenge is a good excuse to make some again! Most musubi are trangle-shaped, like the ones sold at Mana Bu’s musubi shop in Honolulu. We don’t have a triangle-shaped musubi mold, but we do have the Royal Selangor Jelly Mould to shape the musubi! Putting the musubi together couldn’t have been easier.

Spam Musubi in a Cone

To make the Spam musubi, we basically followed the instructions from our Secrets to Making Spam Musubi Part 1 and Part 2 posts. First I sprayed a little non-stick spray into the jelly mould, then spooned some rice into the cone and pressed it to one side with the spoon. Since the rectangular Spam slice will not fit into the triangular jelly mould cone, I cut the Spam slice diagonally and wedged the two triangles of Spam pointing downward into the cone. 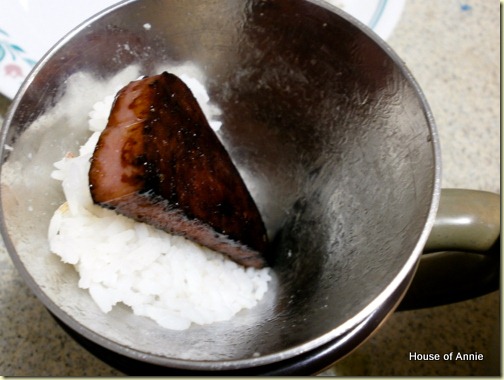 One other ingredient that you sometimes see in musubi is takuwan – pickled daikon radish. We don’t have any takuwan but we did have a jar of gherkin pickles so I cut one lengthwise in half and lay one half on the spam before filling the rest of the mould with rice.

Once everything was packed together, I unmolded the musubi and wrapped it in some toasted nori.

Besides the Spam musubi, we also made ume (salty plum) musubi. We had actually brought back these ingredients from our trip to Japan last year, but they had been sitting unused since then. This morning’s musubi making was a great excuse to break into the ingredients. 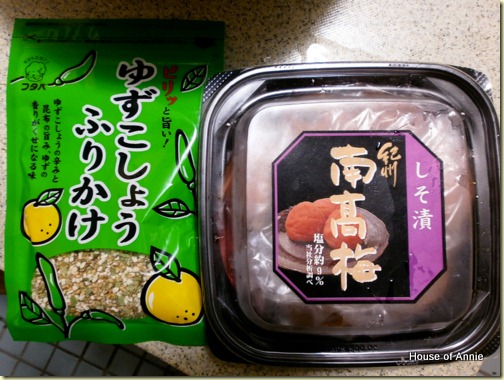 For the ume musubi, I just filled the cone partway up with rice, plopped on the ume (which was a rather large one) and then pressed the remainder of the rice on top. Then I unmolded it and wrapped it with nori. The last step was to sprinkle some of the furikake on top of the exposed rice. 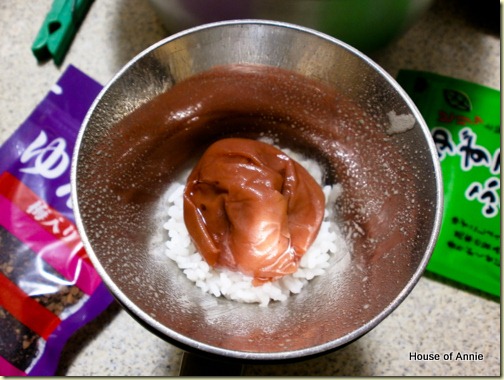 These musubi were very easy to put together, once you had all the ingredients in place. After I took the requisite pictures, we wrapped each musubi in plastic, to be eaten for breakfast later (yep, we did all of this in the morning before work!)

Even though it seems like a lot of rice, these musubi were very tasty and very quickly eaten. I was left craving more! In fact I am craving one this very minute as I write this post. I wonder if I can sneak downstairs to make another musubi as a midnight snack…