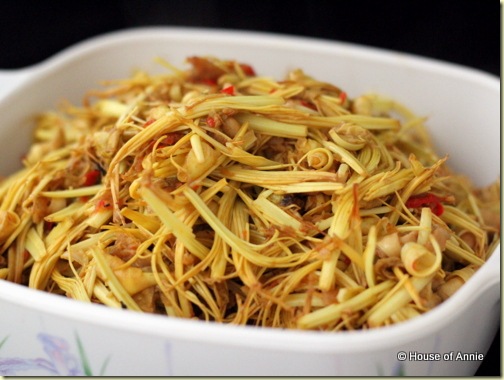 There are a lot of delicious foods we’ve seen in Sarawak that are not commonly prepared in Peninsular Malaysia. Some foods are famous like Sarawak laksa and Sarawak layer cake. But other foods like midin (fiddlehead fern) and dabai (Sibu olive) are so unique to Sarawak that I never knew they existed until we moved here.

One unique food that I heard about only when we first moved here was durian flower. One of my coworkers told me that they actually sell the flowers in the market when it’s in season. I’d never heard of such a thing before, and thought he was kidding. Who would want to eat the flowers of the durian?

(Check out this post on My Sarawak’s Travelogue to see what durian flowers look like on the tree.)

But he said that Sarawakians love this dish. They usually cook it with curry or belacan (shrimp paste). When I asked other Sarawakian friends about it, they confirmed the story.

I was intrigued. I decided that I had to try this dish!

Over in Peninsular Malaysia, they can get durians almost year-round. But Sarawak only has one or two durian fruiting seasons per year, depending on the weather. In addition, the durian flowering season doesn’t last very long either. Sometimes they’d be in the market one week and gone the next. I had to wait this whole three years (God, has it been three years already?!) to actually see some with my own eyes.

But when they do come, they come all at once. Durian flowers are right now in season in Kuching, and the markets are flooded with them. People are snapping them up to cook at home, and even some food outlets are featuring special durian flower dishes on their menu. 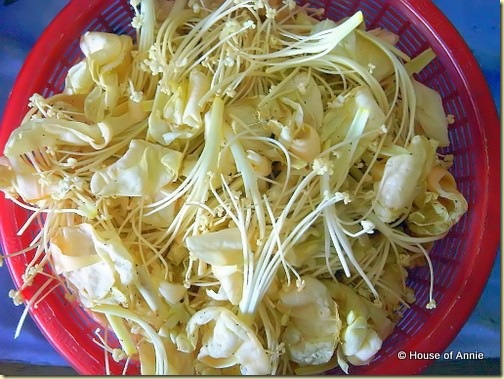 (Oh, in case you’re wondering, durian flowers do not smell anything like durian fruit. They are faintly sweet and fragrant. No need to hold your breath whatsoever!)

Annie picked some up at our local market. They were selling for 7 ringgit per kilo, and she brought home half a kilo’s worth. But you can’t just cook them right out of the bag. They have to be cleaned first by removing the anthers (the pollen producing part of the stamen) which can be bitter.

The stamens are sticky with nectar, so the pollen is not easy to rub off your hands. We also cleaned some of the curly durian flower petals to add to the dish. It’s a tedious process, but thankfully many hands make light work.

Picking Pollen Off the Durian Flowers 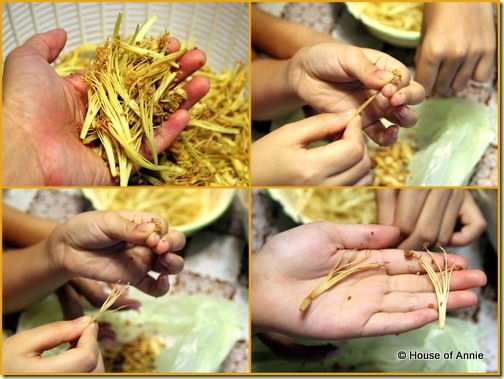 In the meantime, Annie prepared a sambal belacan by dry-frying some belacan paste, then adding it to the mortar with some chopped chiles, shallots, garlic, and rehydrated dried shrimp. I pounded the whole mess down into a thick paste.

With the stamens and petals cleaned and rinsed, we were ready to fry. 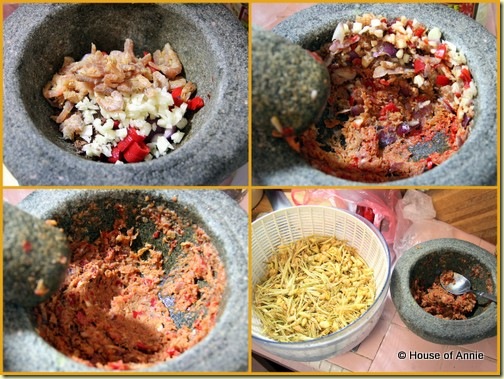 We had some friends over for dinner, and so we asked one of them (an excellent cook in her own right) to fry the flowers up for us. She started off by heating up some oil in the wok, then frying the sambal belacan until fragrant.

Next she added the durian flowers and tossed it to coat the flowers evenly with the sambal, seasoning with a couple of pinches of salt. She poured in about a cup and a half of water, then covered the wok and let the flowers steam-cook. A few minutes later, she gave the flowers another quick toss and then plated it up. 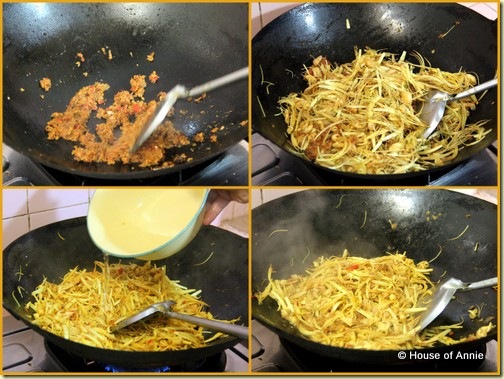 I took my first bite of the durian flower. The first thing I noticed was the very faint fragrance of the flower itself. Then the crisp crunchiness of the stamens. It was light and smooth like midin. The stamens themselves tasted plain to me, with a slight sweetness. Most of the flavor came from the salty sambal belacan.

Actually, I was a bit underwhelmed by the dish. I’m not sure why. Maybe our flowers were not at peak freshness and had lost their vitality and flavor. Maybe the sambal we made was too over powering for the delicate flower. Maybe I need to enjoy more of this dish to get used to the way Sarawakians like to eat it.

So, I’m willing to try eating durian flowers again. You only live once, they say. I’m glad that part of my one life has been here in wonderful Sarawak.