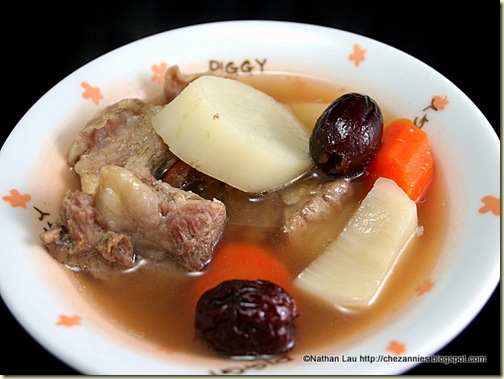 Daikon or white radishes are all over the farmer’s markets right now. They looked so good that I couldn’t help myself and bought 5 of them. Not all of them are going into this soup. I used some of them for radish cake (which I will post later).

But this soup is simply delicious and is sooo easy that I don’t even know why it needs a recipe. The way I’ve always had it when I was young was so simple and plain and yet so tasty. Basically, my mom would boil some bones (chicken or pork or a combination of both) and then add large chunks of white radish and boil for several more hours. And that’s all there was to it, a bit of salt and pepper and you’re good to go! The daikon provided a lot of sweetness to the soup and after several hours would be somewhat translucent and delicious to eat too.

When I decided to boil this soup, I was rushed for time. I started the soup really late and wanted maximum sweetness. So, I decided to add some dates and carrots to help the daikon along. Obviously, my daikon didn’t get too soft but it was still soft enough to bite into without it being crunchy. The addition of dates and carrots really made this soup so sweet. Just the perfect savory sweet soup for wintertime! 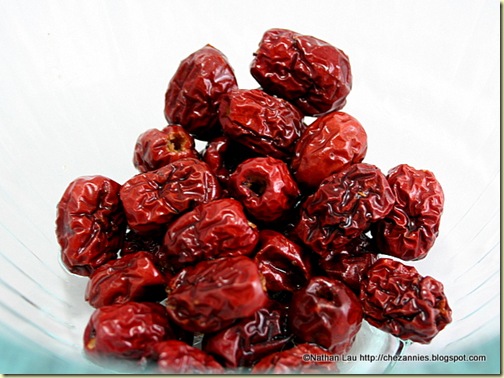 The Best Way to Get Clear Soup

I used pork bones for my soup this time. I find that going to the Asian grocery store and asking for pork neck bones are best for this soup (ribs will work too but why pay so much for meat that you’re going to boil?). Make sure to ask the butcher to cut them into large chunks for you when you get the bones.

The best way to get a clear soup is to start the bones in a pot of water and set it to boil. Once it is boiling quite vigorously and all the scum has come out, take the pot of bones and throw out all the water. Rinse the pork bones (I sometimes rinse it about 3 times) and restart with fresh water. Set the pot of water with the bones to boil again and as soon as it boils, bring it down to a simmer. You will still need to skim a little but the soup will be much clearer and hardly murky at all.

Pork and Daikon Soup with Red Dates and Carrots

Method
1. Put pork bones and as much water as needed to cover bones in soup pot. Bring to boil and once it boils, let boil vigorously for another 2-3 minutes until a lot of scum has risen to the top of the pot. Turn heat off and throw out water from pot. Rinse pork bones to remove all scum.
2. Refill pot with 8 cups water. Bring pork bones to boil again. As soon as it comes to a boil, turn heat down to low and simmer for 30 minutes.
3. Add dates, daikon, and carrots to soup. Bring to boil again and then turn back to simmer. Add some salt and fish sauce now (about 1 tsp each). Simmer for 1-2 hours or until daikon has gotten really soft and soup tastes really sweet.
4. Season with more salt, white pepper, and fish sauce to taste. You want to make sure that the salt balances the sweetness of the soup.

Pork and Daikon Soup with Red Dates and Carrots

Enjoy with rice and other dishes! Even though the meat on the bones have lost most of their flavor, I enjoy picking on the meat and dipping them in soy sauce (even better if you add some chillies in the soy sauce for some heat!).