This is one of those slap-dash dishes that turned out better than expected.

Pork with Leeks and Basil 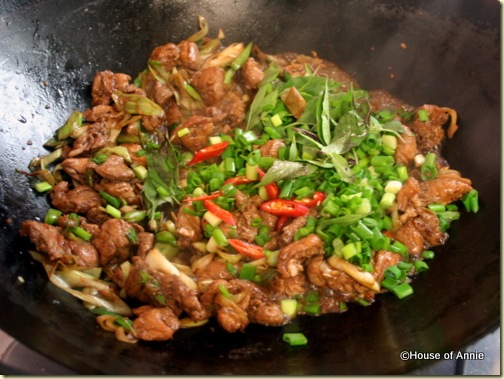 This dish came about one day when I looked into my fridge and realized I had a little bit of this and a little bit of that left that needed to be used up. I had a couple leftover leeks from the leek and potato soup I made. And I also had some Thai basil and green onions left over from the last time I made larb. With all these random herbs and greens in my fridge (including some red chillies), I decided I would do something that would use it all up in one dish. 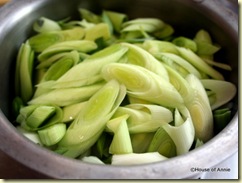 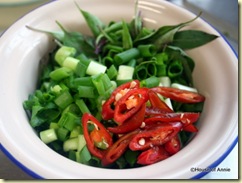 I always keep some some sliced pork in the freezer that I had divided up for days just like these when I am in a hurry but wanting to make a stirfry quickly. I would get some tenderloin or country style pork ribs and slice up the meat into thin slices. Then put them into quart-sized ziplock bags and lay them out as flat as possible. Then freeze them. Don’t forget to label them—meat somehow takes on an undistinguishable character when it freezes (is this pork? chicken? beef?—yeah, I’ve been there!). Once you have them frozen in this way, it is so easy to take them out to defrost. The thin flat layer makes it a quick defrost when you’re in a hurry. 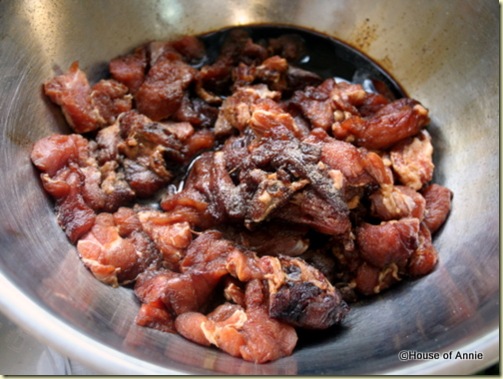 Armed with my leftovers and meat, I was set to go. I wasn’t quite sure how I was going to season it but I decided to just let my instincts take over. And it worked really well. The soy-based sauce complemented the basil and leeks very well and made it somewhat Malaysian. The fish sauce, Thai basil and chilli gave it a Thai flavor. I guess you could call this a Thai-Malaysian fusion dish! (If the fusion is both Asian, would you still call it fusion? Hmmm…somewhat confusing eh? ^_^)

Confusing terms maybe, but the flavors were spot on. The leeks were just wonderful with the pork. And the Thai basil gave it a nice licorice-y sweet flavor. Somehow, they all played so nicely together even though in the beginning I worried that I would have too many competing flavor.

1. Season the pork with the marinade ingredients and leave to marinate for 30 minutes.
2. While pork is marinating, prep the rest of the ingredients: chop the garlic, slice the leeks, chop the green onions, slice the red chilli, and remove the leaves of the Thai basil from its stem.
3. Heat wok over high heat and put in the vegetable oil. Throw in garlic and leeks and stirfry, making sure to keep tossing them around so as not to burn them. Continue to stirfry till leeks are slightly wilted. 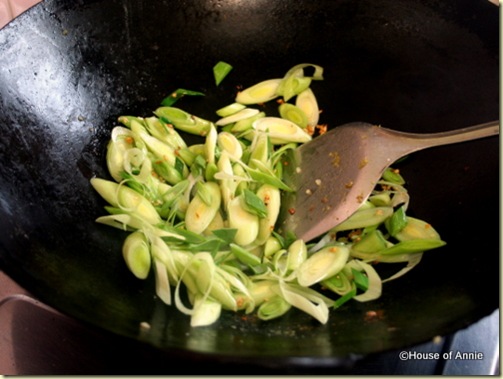 4. Add pork, along with all the marinade and toss around for about 5-8 minutes until pork has cooked through.
5. Lower heat to medium, add the Thai basil, green onions and chilli and toss to mix.
6. Taste and adjust flavors—the dish should be distinctly salty-savory with a hint of sweet, smoky, caramel notes from the thick soy sauce and sugar.

Dish out and enjoy over rice.

Pork with Leeks and Basil 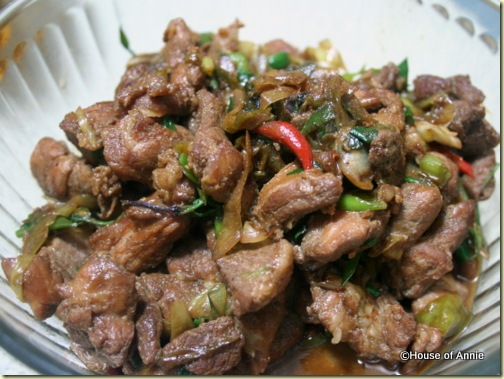 So next time you find yourself looking in your fridge and you have a host of different herbs inside looking to be used up, be adventurous and put them together in a stirfry. You just never know what new flavors you might unearth as you play with your food.

In the meantime, you can of course, always intentionally get all these ingredients and try out my dish to see if it works for you the way it did for me.

One thought on “Pork with Leeks and Basil”