I feel the need, the need for SPEED! 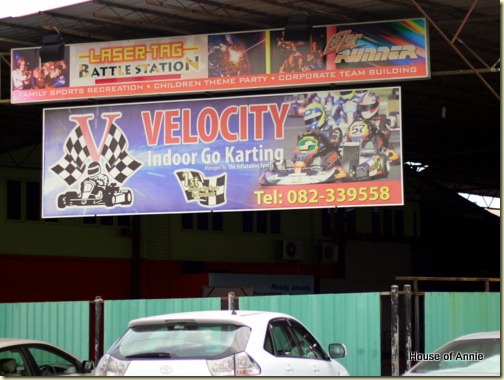 When we were back in San Jose, we had friends whose kids were all the same age as ours. In the Bay Area, there are lots of choices for birthday party venues for young kids, like My Gym in Campbell, Pump It Up in Sunnyvale or even Lemos Farm in Half Moon Bay. Those were some really fun experiences.

However, we’ve not really found a lot of birthday venue options for our kids here in Kuching, especially as they approach late childhood-tween years.

Last year, we threw a birthday party for Esther at our place, but catered and organized by McDonald’s. This year, we actually held the party at McDonald’s. (Please don’t hate us!) Our kids are growing a bit older now, and parties at McD’s or KFC are just too boring for them.

Where can 10 year-old kids go for a fun birthday party in Kuching?

Well, we’ve found something that is up to their speed.

One of Daniel’s shoolmates invited him to his 10th birthday party at Velocity Indoor Go Karting in the Bintawa Estate area of Kuching. Bintawa is an industrial area near the docks that is full of warehouses – perfect for a nice-sized go kart track. We got permission for Esther to join the party as well, and then tagged along just to make sure she was safe and happy.

Velocity is open 7 days a week from 2 PM to late evening. It’s usually open to the public all day, but the party had booked the entire facility for 3 hours. Here’s a pic of the promotions and costs as of today: 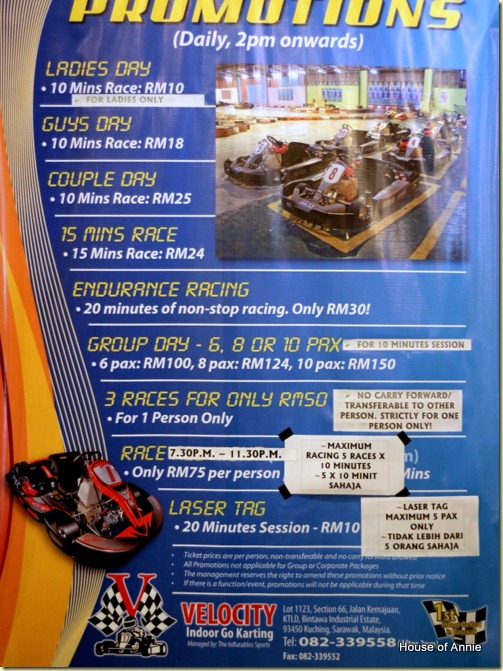 The go kart track runs around and through the interior of the warehouse. There is a party room at the front of the building that is walled off and (thankfully) air conditioned. There are lots of tables and chairs, a small kitchen, a pool table, and big windows so you can watch the action outside. 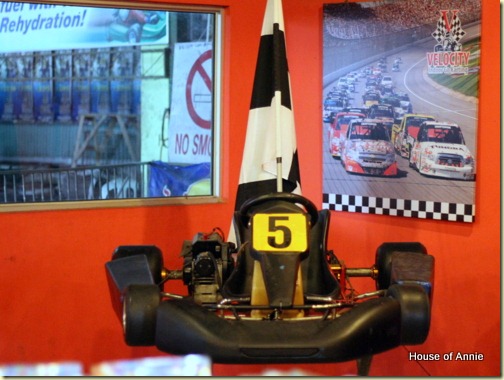 Off to one side is the helmet station. The “public” helmets are on top while club member helmets are stored in the cubby holes. If you’re using the public helmets, you have to wear either a plastic shower cap or a head sock. 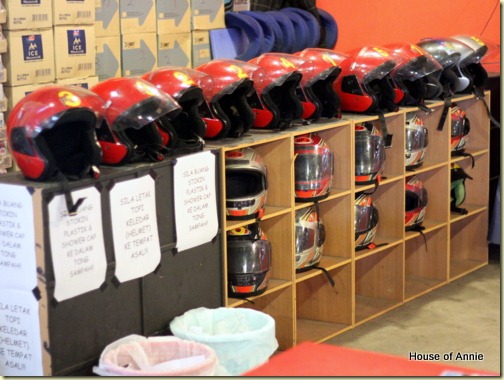 Well, remember that this is Sarawak, a tropical country. Imagine jamming your head into a tight-fitting helmet and riding around in the 90*F heat. You’re gonna sweat. And your head sweat will soak into the helmet lining.

Daniel getting ready to go karting 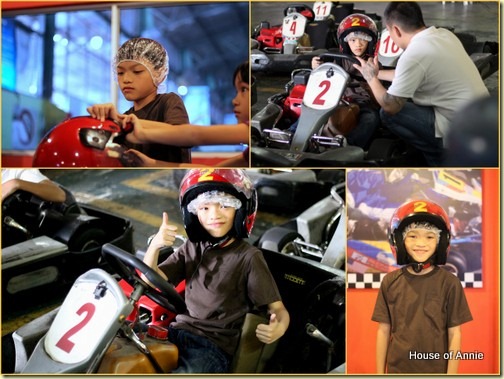 Getting up to Speed

Daniel was in the first group to drive. I remember way back when he was 6 years old, struggling to drive a bumper car at the Genting Highlands Resort. Fast forward 4 years, after many hours of playing as Lightning McQueen in the Cars game on Wii and Asphalt 6: Adrenaline on the iPad, and he’s a bit more experienced in steering a fast vehicle.

Today was his first time behind the wheel of a real, powered vehicle. His first couple of laps were tentative but he soon got the hang of it. Before you know it, he was passing other drivers on the straightaways and taking S-turns like a pro. Cheeky guy even has the  confidence enough to take a hand off the wheel for a brief wave. 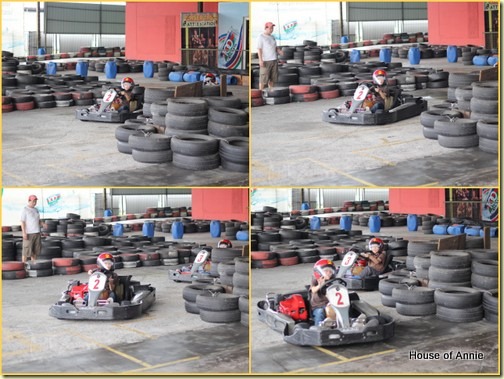 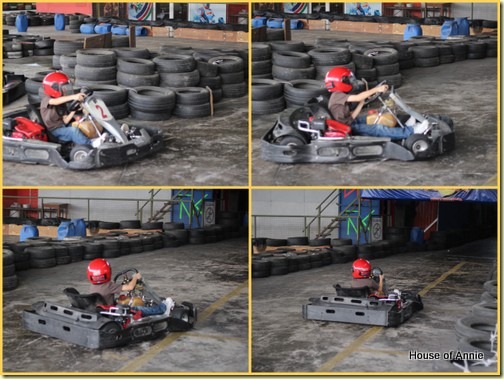 edit: here’s some video I took of Daniel zooming around the track

Here’s Daniel with the birthday boy, all smiles after their group finished. 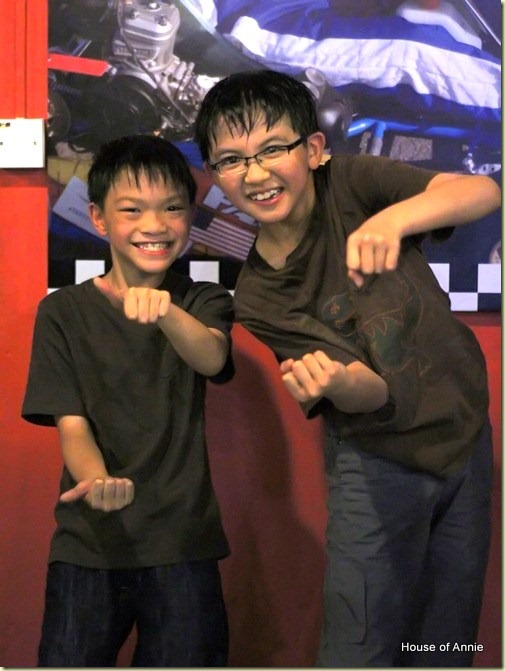 Esther was in the next group, but she was too short to reach the pedals. No matter. She got a personal driver to make sure she didn’t miss out.

Me and Esther ready to go karting 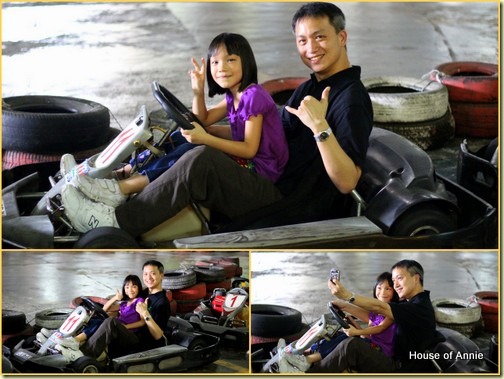 I’ve been driving cars since I was fourteen but this was actually my first time in a go kart. Driving a kart is similar to a car, except the brake is operated with the left foot instead of the right. I didn’t use the brake as much as I hit the gas, though! Just call me “Leadfoot”.

Me and Esther go “zoom zoom” 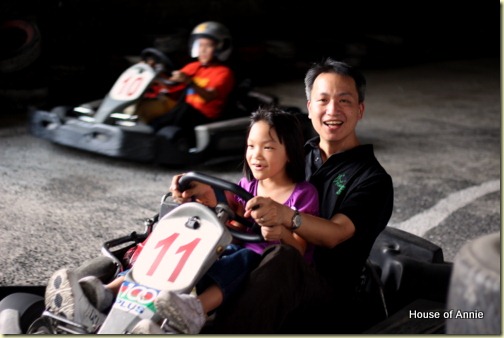 Have you ever been go karting before? Would you like to go? Leave us a comment below and tell us about it!

There’s a Laser Tag room upstairs that party goers who weren’t racing could play in. But the room is too small and only one level so it’s not as fun as the track. Really, the track is where all the real fun was happening.

So much so, that the kids are asking me when is the next time we can go karting.

I’m giving Velocity Indoor Go Karting Kuching a 4 out of 5 star rating. Overall, a good experience, but they need to beef up the air conditioning in the party room and make the atmosphere a little more comfortable / less noisy.