When we were back in Hawaii, we always used to pick up fresh sui gow and wonton skins from the Yat Tung Chow Noodle Factory in Honolulu’s Chinatown. There’s nothing like using freshly-made skins for making dumplings at home. When we moved to the Bay Area, though, we couldn’t find a fresh noodle factory here in San Jose. 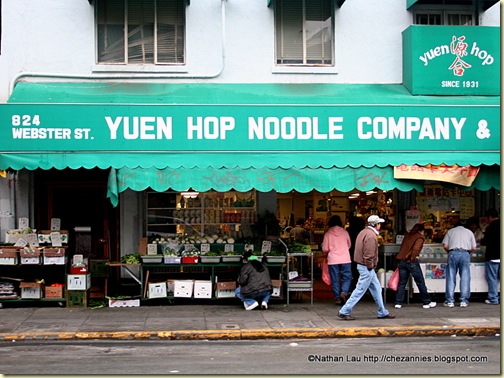 Now that the weather is getting cold, I am craving more soups and stew-type foods. This is perfect weather for a nice, hot bowl of wonton soup. But it’s just too far for us to go all the way to Gum Kuo in Oakland for a bowl of wonton soup. Besides, I figure it’s easy enough to make on my own.

Normally when I make wontons, I fill them with fancy fillings like chopped up water chestnuts, shiitake mushrooms, onions, green onions, carrots, shrimp and pork. 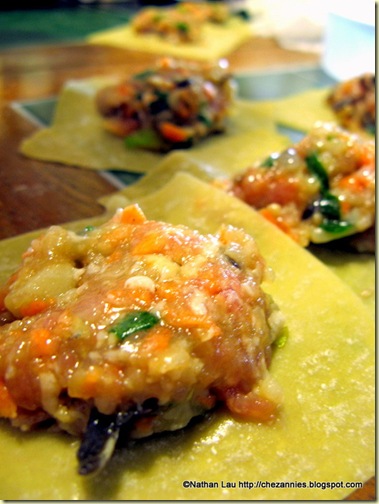 Not this time. This time, I really wanted to try to make it more “Hong Kong-style”. Actually, I don’t really know what “Hong Kong-style” is. Just that it doesn’t seem to have much else in it besides a lot of shrimp and a little bit of pork.

Both styles are good but sometimes the simpler one hits the spot when you just want a cleaner flavor on your tastebuds. But being me, I couldn’t resist sticking a little leftover jicama (chopped fine) and a bunch of green onions (minced) into the mix.

The good thing about making wontons (as opposed to potstickers), is that it is MUCH simpler and you don’t need as much filling to make a large batch. And the wonderful thing is you can freeze these wontons so easily that the next meal will be even faster.

The skins I tend to buy is the Hong Kong style skin (which is much thinner than the regular wonton skins). You get more skins in one package and the flavors of the filling also come through better. It will normally state that it is HK style on the package so pay attention next time you go get some skin. 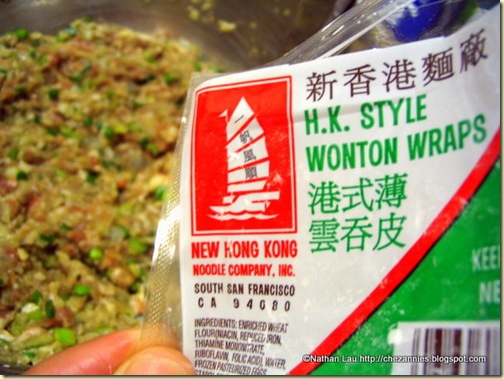 Now, I did want to mention something about the wrapping of wontons. Have you ever paid attention to the restaurant help at a Chinese restaurant when they are wrapping up their wontons? Basically, they just have a big shallow bowl of filling, and a stick-like object to push the filling to the side of the bowl onto the skin. Then, they just scrunch up the skin around the filling and move on to the next one. None of this fold-like-a-boat-and-seal-with-egg nonsense.

So I decided to try this method. And guess what? It is so easy and none of my wonton fillings fell out when being boiled. Course, I filled mine a little bit more than theirs but hey, that’s the advantage of making them at home! 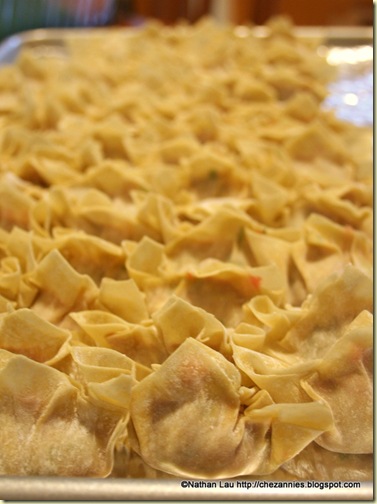 As for the broth for this meal, my mom taught me a really simple soup broth recipe. Just grab a half cup of dried ikan bilis (anchovies) and rinse them, then throw them in a pot and add some water. Half an hour later, you have a nice sweet, salty stock that is just right for wontons. But I hate that you have to fish out all these little anchovies and how it tends to make the soup not perfectly clear.

Well, I found the trick that works wonders. I bought these nifty little stock bags at Daiso. Even though they are not very large, using two of them filled with anchovies was enough to make soup for my family. The flavors infuse the broth but the broth remains perfectly clear (you don’t even need to skim). When you’re done boiling them, just pick up the bags and dump. And they work for just about any bouquet garni that you make too. 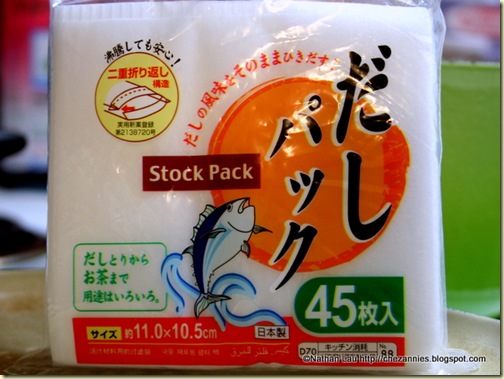 (enough for one package of HK style skins)

Method
1. Mix all ingredients together.
2. Set a small pot of water to boil. Make about 3-4 wontons and drop them in water to check that seasonings are sufficient. I always do this before making the rest because most times I just eyeball my seasonings. It’s also good practice because different brands of soy sauce and fish sauce have different levels of saltiness. I use kosher salt which tends to be less salty than regular table salt. So all these differences may affect your filling (of course there is also the fact that you might like your food more or less salty).
3. Wrap the rest once you’ve assured that you have the right amount of seasoning. The easy way is to just put a small (about 1 1/2 tsp) amount of filling, making sure that one piece of shrimp makes it into each wonton and squeeze the wonton wrapper closed. 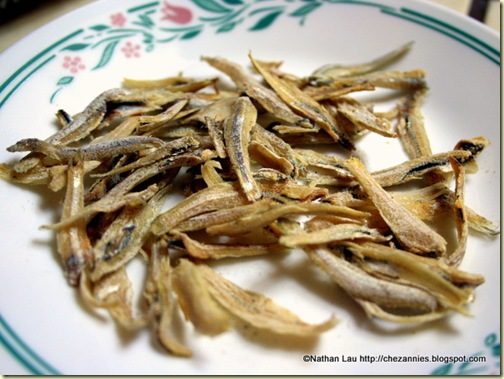 1 bunch choy sum or yu choy (or any other leafy greens like bok choy), washed and cut into 2 inch pieces.
salt and a little fish sauce to taste
a little sesame oil and white pepper for each individual bowl

Method
1. Wash ikan bilis and then stuff them into two stock bags.
2. Put water into large pot and add stock bags. Bring to boil and then simmer for roughly 30-45 mins. In the last 5 minutes, add vegetables. Taste and adjust seasonings adding salt and fish sauce if needed.
3. While stock is boiling, set a smaller pot of water to boil and cook the wontons separately in this pot. This keeps the soup stock from becoming too starchy and murky. Boil wontons (however many you want to eat) for about 6-8 mins and then using a slotted spoon transfer to soup pot. 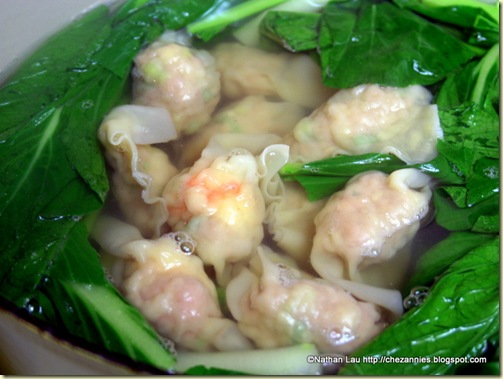 4. Ladle into individual bowls and add a dash of sesame oil and white pepper. 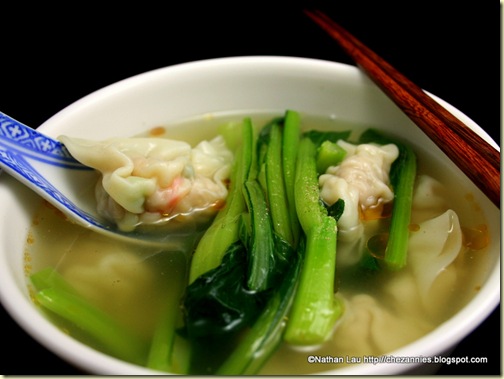 ps. yes I didn’t add noodles this time. Sometimes, I like having just wontons. Normally, I like my wonton noodles kuon loh style (dry tossed). I will share that recipe with you in another post.