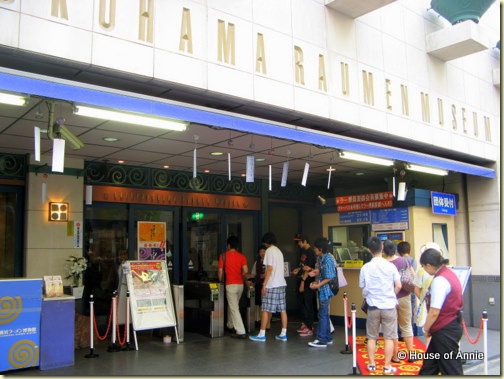 We’re big fans of ramen. We try to eat them wherever we are. Our favorite in Hawaii is Yotteko-ya. Our favorite in San Jose was Tokushima do Henkotsu (but they closed down) and in Singapore, we found Ippudo to be really good too.

Sure seems like we are into tonkotsu style more than any other type of ramen, though I enjoy my fair share of shoyu ramen. So anyway, when I was searching for where to go for ramen in Japan, I came across several sites talking about the Raumen Museum in Yokohama.  It sounded really intriguing and when I mentioned it to Nate, he thought it was worth visiting.

So that evening after a full day and night of traveling to Japan, heading to Yokohama and seeing the sights, we decided to take the subway up to Shin-Yokohama and have dinner at the Raumen Museum.  Truly, it wasn’t so much a visit to learn about ramen and its history. We were there for ramen!

How Much Ramen Can One Person Eat?

For myself, I was imagining that I could do four to five mini bowls. (see I was expecting the bowls to be the size of rice bowls. They’re “mini”, right? Another idea I had was, if the bowls weren’t too small then Nate and I could share one bowl at each place.

So we got in, took a cursory look around the small ramen exhibit, but it was all in Japanese. We decided to head to the basement for our bowls of ramen. As you approach the stairs leading down, you notice that the environment changes. The floor is set up to resemble an old Japanese village. It was a pretty neat concept and they featured it well.

So we started to walk around. We noticed that some of these ramen shops had lines out the door while others seemed to have not as many customers. Each shop has a vending machine outside where you can choose the dishes you wanted. You pay your money, then choose your dish, and out pops an order on a small ticket.  You’re supposed to hand your ticket to the hostess as she seats you, and she will deliver your order to the cook.

The problem is, all the signage is in Japanese. The only thing that was written in English was that each customer was expected to eat a bowl of ramen. There goes the idea of us sharing one bowl. 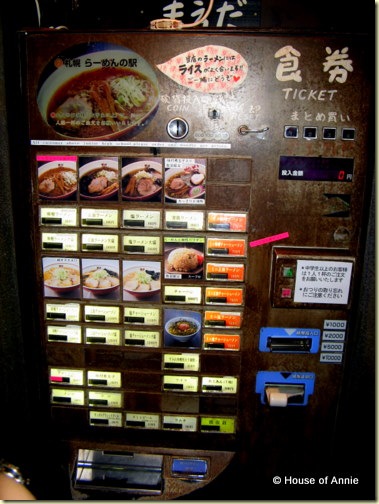 So after making one circuit around all the different ramen shops, we decided we needed a plan of attack.  Looking at our English guide to the nine different ramen shops, we noticed that each shop was renowned for one style of ramen, either shoyu, miso, or tonkotsu-style. This doesn’t mean that they only served one type of broth, but that the style was what they were famous for, depending on their region. 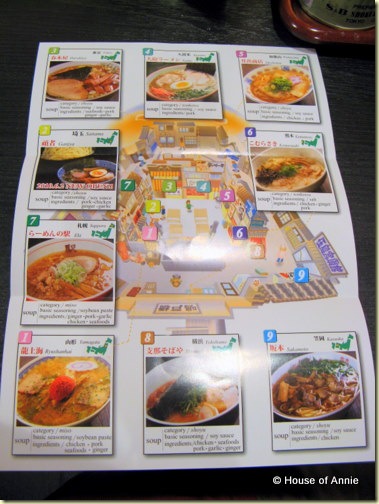 We were standing around, poring over the guide and not being able to make up our mind,  when this security guard / guide appeared and started to write down the waiting times for each ramen shop on a chalkboard.  So I asked him if had recommendations for which shop to go.

He didn’t really speak much English, but he understood my request, and he was extremely helpful.  He asked me what kind of ramen I liked (lots of fat or little fat in the soup, thin/thick noodles, which flavor broth). I told him we were willing to try three bowls apiece.

He said that miso ramen is really popular in Sapporo, so we should go to the miso ramen shop that hailed form Sapporo. But he then added, even though their miso ramen is good, his personal favorite is the shio (salt) ramen from the same shop.

Helpful Guard at the Ramen Museum 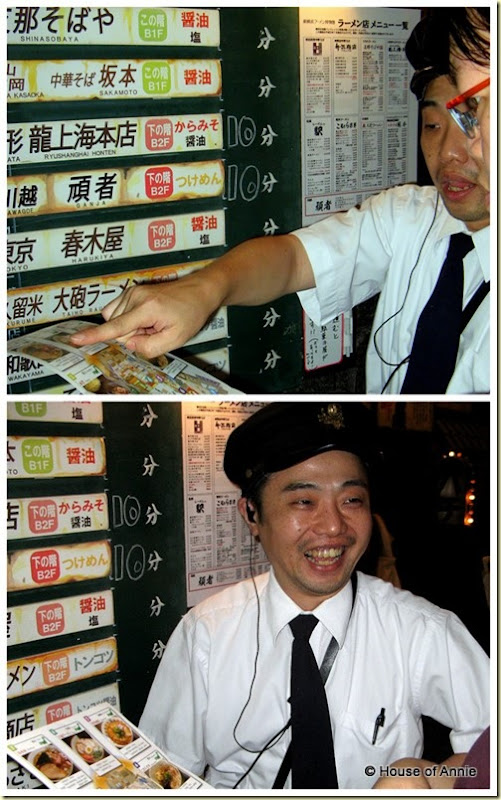 After another 5 minutes of discussion with him, we had our choices made.  This guard was so helpful, he actually led us to our first shop and even showed us how to use the vending machine. He pointed out that the first column on the right is for the mini bowls. The choices we could make were, regular bowl, more meat, and different soup broths.

Talk about oustanding service! We were blown away by his hospitality.  After feeding our money into the machine and getting our tickets, he then left us with the waitress.  We were so thankful to have bumped into him.

So we went in, sat ourselves down, and out came these two…mini bowls? I think these were more like regular Malaysian size bowls.  The waitress gave Nate the miso ramen and gave me the shio ramen. 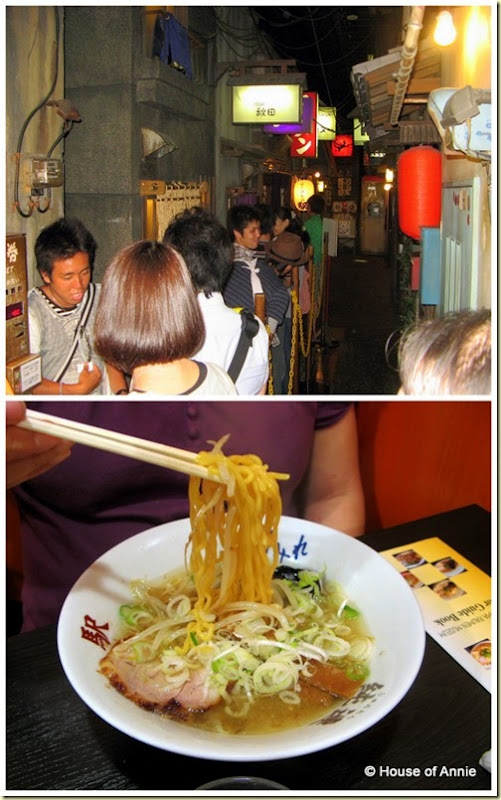 The first thing I noticed was the thick layer of oil covering the ramen. I picked up my chopsticks and spoon, stirred up the broth and took a sip.

I moaned in delight.

It was really good. The guard was spot-on.  Nate, however, didn’t seem to be ejyoing his miso ramen as much. “It’s too rich!” he exclaimed. “I cant get over all the oil in the dish.”

All around us, people were noisily slurping up their ramen, just as I had imagined that they would.  Keep in mind, I am not Japanese, and I don’t slurp my noodles (but I’ve always wanted to try).

Here I was with my piping hot bowl of ramen. Gamely, I picked up the noodles and proceeded to slurp up the noodles.  Here are the effects of my attempt to slurp noodles.

1. I ran out of breath before I could get all the noodles into my mouth.

2. I almost choked on my noodles while trying to quickly suck in air as I slurped up the noodles

3. I guess I didn’t get enough air into my mouth with the noodles because after eating my ramen, I now have a flap of skin hanging down from the roof of my mouth, and a fuzzy tongue from drinking ultra-boiling hot soup.

(Note to self: ramen tastes just as good, eaten slowly)

We were already getting full after the first bowl of ramen.  Remember, I originally wanted to eat three bowls.  But after I saw the size of the bowls, I asked Nate if he was still going to eat three bowls of ramen?

So we forged ahead.  Our second stop was for some typical Tokyo-style ramen, Again, we decided to try two different bowls. It turns out that we actually ordered one with meat, and one with more bamboo shoots. We found the bamboo shoots to be really tender and tasty but the broth and the chashu (sliced pork) was lacking. 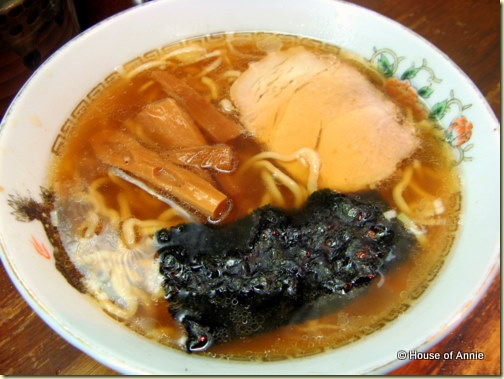 We were very full by the end of the second bowl.  No way we could go and eat at a third shop right after that. Since it was still early in the evening, Nate and I decided to exit the museum and walk around outside for a bit to see whether we could make some room.

No amount of walking, though, could bring back the hunger for more ramen. We had to throw in the towel.  Finding some good tonkotsu ramen would have to wait for another day…