Homemade dumpling skins are better than store bought, and easier to make than you think! 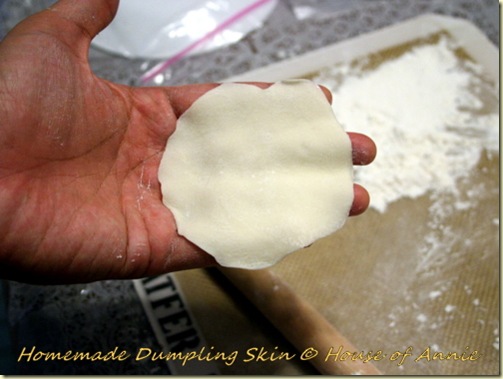 Way back in 1995, I took a tour around China. Of the many memories I cherish, I remember standing in the doorway of a large kitchen, marveling at a group of ladies sitting around the table, rolling out dumpling skins for a jiaozi lunch later. The process (for them) was quick and effortless. How in the world could they turn out such perfect looking skins?!

If at First You Don’t Succeed

When I returned home to Hawaii, I was invited to a party where some Chinese university students were making dumplings. Again, their skill at dumpling skin rolling was impressive. I tried my hand at making one but it came out woefully lopsided.

Since we were living within heavily Asian communities in Honolulu and San Jose, we had ample access to factory-made, store-bought dumpling skins like the ones we used for our Won Ton Soup recipe. Fresh, store-bought skins are good enough for our use. But I secretly harbored the desire to make my own skins at home.

Get Some Tips First

Last October for our Anniversary, I got Annie the Asian Dumplings cookbook by our friend and fellow food blogger Andrea Nguyen. We were both excited to get the book, and pored over all the recipes trying to figure out which ones we wanted to make. The very first recipe is her Basic Dumpling Dough. That’s a very good place to start!

So when we decided to throw a homestyle Japanese dinner party for our friend Paul and his family, we knew gyozas were going to be on the menu. Earlier in the day of the party, I prepared the dough:

1. Put flour in a bowl and make a well in the center. Stir the flour while you add the water in a steady stream. Keep mixing until you have a shaggy dough. 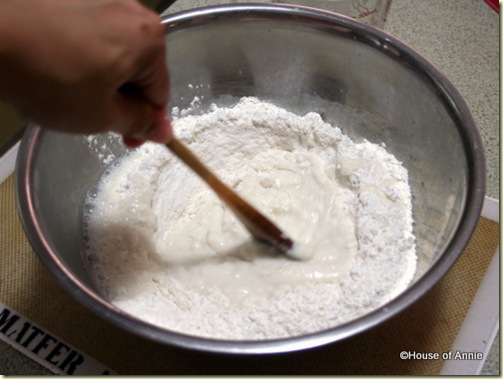 2. Knead the dough to bring it together into one large ball. 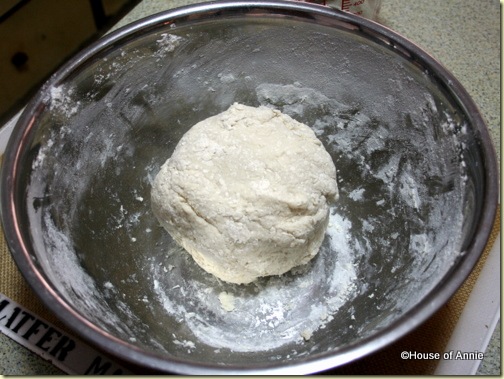 3. Transfer the dough to a floured work surface (I used a Silpat silicone baking mat) and knead it for a couple of minutes until it becomes smooth and elastic. Seal the dough in a zip-top plastic bag and let it rest for up to 2 hours. 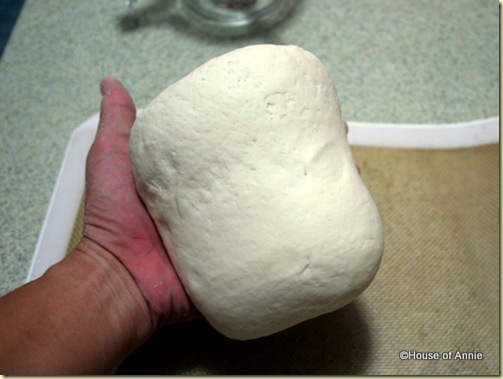 4. After the rest, pull out the dough and cut it into 4 roughly equal sections. Roll each section into a 1-inch thick log, then cut each log into 8 pieces. Shape each piece into a thick coin or disc. Lightly flour the top and bottom of each disc. 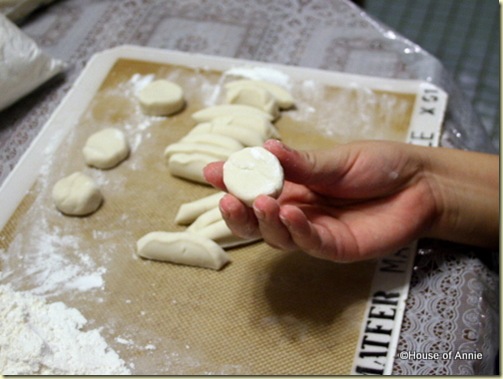 5. Andrea recommends using a tortilla press to flatten out each dough disc. We don’t have a tortilla press, so we used two small plates and a cut-up sandwich bag to press them flat. 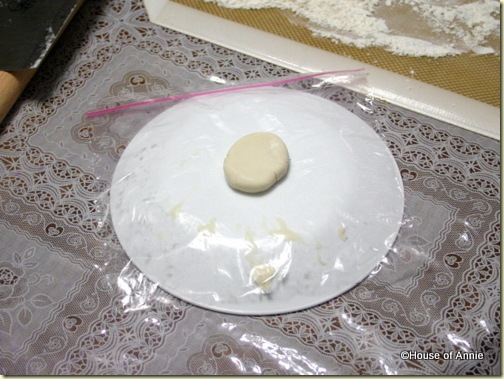 6. Now here comes the fun part. Holding the flattened disc gently, use a dowel rolling pin to press on just the outer edges of the disc. Roll back and forth once, then rotate the disc. Roll, rotate. Roll, rotate. Add a little flour if necessary to keep it from sticking and tearing. 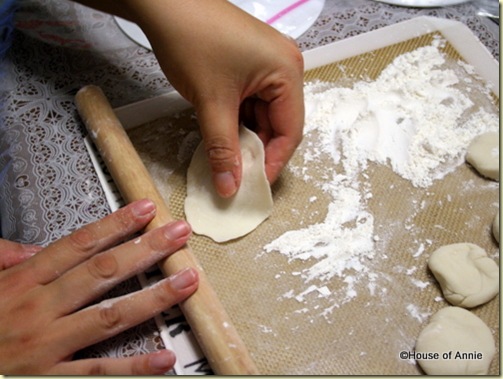 7. You don’t want to make it too thin. It has to be thick enough to hold whatever filling you’re going to put in it. The final dumpling skin should be just over 3 inches in diameter. 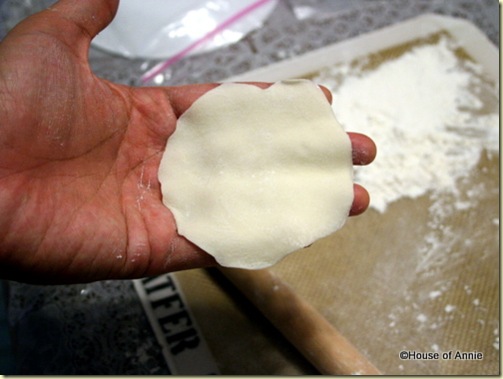 (If you need to see the rolling process in action, Andrea just uploaded a new YouTube video on “How to roll out Asian dumpling wrappers”.)

Since Annie was making and wrapping the gyoza, she let me finish rolling out the dumpling skins. And guess what? With enough practice, I got to be good at it! I was more than happy – I was giddy with glee 😀

I had finally made my own dumpling skins, skins I could be proud of!

Thanks, Andrea, for your wonderful cookbook! We will definitely be cooking (and posting) more recipes from it in the years to come.

I am entering this post in the Presto Pasta Nights roundup, hosted this week by Once Upon a Feast.

34 thoughts on “How to Make Dumpling Skins from Scratch”