I successfully take on the challenge of making this classic Persian dish for the first time. 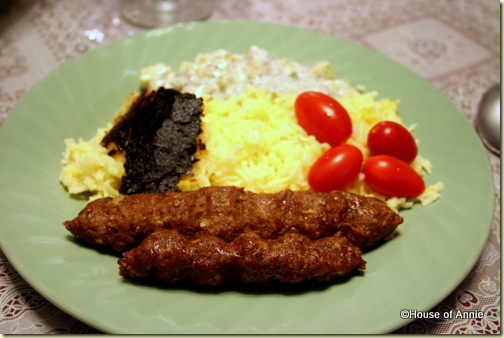 We’ve been here in Kuching for over a year now, and we’ve settled in nicely.  We’ve even had a chance to throw a few parties at our house, doing a Japanese dinner for our friends one night, and inviting friends over for Esther’s birthday in August.  But I’ve been meaning to invite my boss to dinner. My boss is based in San Jose, but he works here half the time.  He lives out of his hotel room and eats out for every meal, so I was sure he’d appreciate some home-cooked food.

So I invited him over to our house for dinner this past Saturday. My boss was born in Iran, so I thought it would be nice to make him some Persian food.  I started researching dishes and recipes, and decided to make the classic Persian dish, chelow kabab koobideh – rice with mince meat kebab.

My boss mentioned that he is a big fan of kebab, so I had my work cut out for me. I consulted a lot of kebab recipes, but eventually decided to try this one.

I started out by double-grinding a kilogram of beef chuck using our KitchenAid food grinder attachment – first using the coarse plate and second using the fine plate.  Next, I grated a couple of onions using a box grater, and drained them in a sieve so that they were not too wet.  For seasoning, I used Himalayan pink salt (we didn’t have kosher salt), fresh ground black pepper, turmeric powder, smoked paprika, and granulated garlic (we were out of garlic – d’oh!).

The onions and seasoning went into the bowl along with two eggs.  I mixed and kneaded the meat until it everything was well combined. This recipe on Familyspice.com says that the meat should not be too wet or it will not hold its shape on the skewer. It should be light, airy, and not sticky. After the meat was mixed, I covered the bowl in plastic wrap and put it in the fridge to marinate. 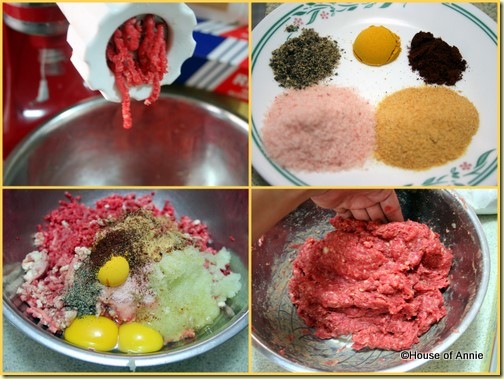 When it came time to cook, I fired up some charcoal on my WSM’s charcoal bowl (similar to how I grill ribeye steaks, but with less coal and no cooking grate. We had some kabob skewers which were thinner than the ones used for Persian-style kebabs.  Taking a small ball of the meat, we wrapped it around the skewer and gently squeezed  it into a long, flat cigar-shape. We then pinched the meat into sections using your fingers like scissors.

Note: The meat needs to be evenly balanced on the skewer, or else it will fall off to one side.

We placed the meat over the coals to cook, turning every minute or so until they were cooked through (about 10-15 minutes depending on how thick the meat was). 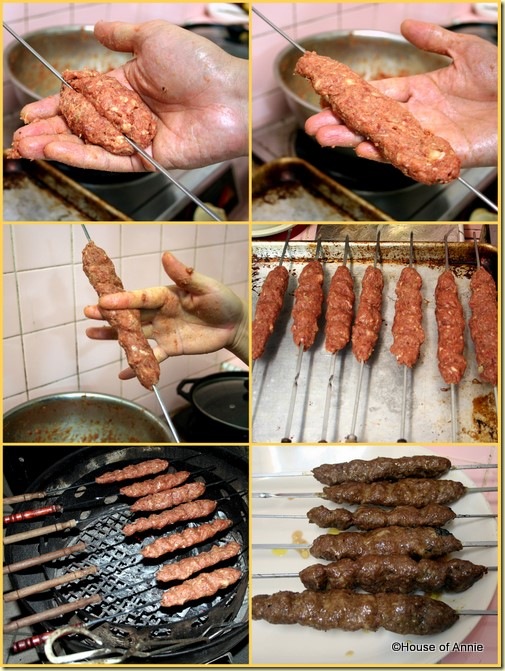 But What About the Rice?

For Persians, making rice is an art form.  It’s not simply a matter of putting rice in an automatic cooker and pressing a button.  According to the My Persian Kitchen site, there is a very detailed process for making Persian rice. But, this process would have been too time consuming for me, so I opted for this “shortcut” version on Jeffrey Saad’s website.

I started with 4 cups of basmati rice in a non-stick pot, rinsed until clear. I soaked the rice for a couple of hours, then drained it. To the rice, I added a 1/2 teaspoon of Iranian saffron, a cup of yogurt, 1/2 teaspoon turmeric powder, a couple of teaspoons of pink Himalayan salt, and a couple tablespoons of olive oil.  I covered everything with 6 cups of water, mixed well, and brought it to a boil.

Once the water was boiling, I covered the pot and turned the heat to low for 20 minutes.  At that point, the water was absorbed into the rice.  I poked 5 holes into the rice using the handle of a spatula and poured about a tablespoon of olive oil into each hole, swirling the pot around to try and settle the oil to the bottom of the pot.

Then I turned the heat up for another 15 minutes before shutting off.

Why this next step, you ask? 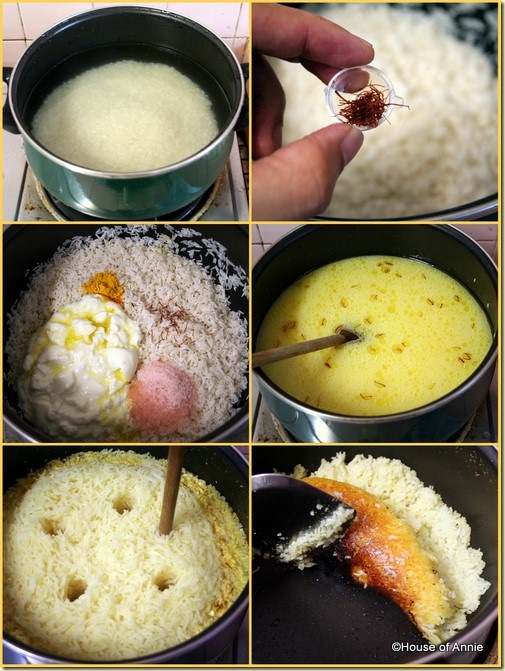 My boss arrived as we were grilling the kebabs, so I enlisted him to help cook while I got table set and the rice scooped into a casserole dish.  I had also previously prepared a Persian cucumber and yogurt salad (maast-o-khiar) based on this recipe (but omitting the garlic) to be served on the side.  As a final touch, we skewered some grape tomatoes and grilled them over the coals once the meat was finished.

Each plate got a large helping of rice (including a piece of tahdig), a couple of skewers of kebab, some cucumber salad, and a few grape tomatoes.

My boss was impressed to be getting a homecooked Persian meal, and he tucked right in.  And he liked it (he really liked it)!  He said that the kebab flavors were spot on, and the only thing that was missing was some sumac spice.  As for the rice, he said that it tasted good, but the basmati rice needed to be fluffier – I had overcooked it.

Everyone liked the meal, including the kids. Daniel even asked for seconds on the rice!  I appreciated how each of the components – the meat, rice, cucumbers and tomatoes, worked together to make a wonderfully delicious combination.  Still, there is room for improvement.  I’m sure we’ll visit these recipes again!