Authentic Chicago hot dogs, and more, found in the heart of Honolulu. 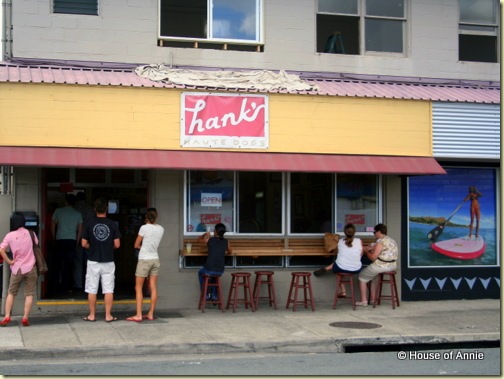 It occurs to me that I haven’t finished blogging about all the places we ate at when we last visited Hawaii for my sister’s wedding back in February. One of those places is Hank’s Haute Dogs, located in the Kaka’ako district of urban Honolulu. Our friend Billy (who introduced us to Pah Ke’s Chinese Restaurant in Kaneohe) arranged to meet us there for lunch.

Hank’s Haute Dogs was opened by Henry (Hank) Adaniya, who has roots in Hawaii but made his fame owning the five-star Trio Restaurant in Chicago. After closing down Trio, Hank wanted to try something different. Hank’s Haute Dogs has only been open for a few years, but, thanks to his commitment to top quality food and service, has garnered such attention and accolades that they opened another store in Waikiki as well as a new “popup” restaurant in downtown Honolulu. Hank’s has even been featured on Food Network’s Diner’s, Drive-Ins and Dives, and on Travel Channel’s Man Vs. Food Nation.

When you walk in to the joint, you are immediately faced with the ordering counter and the menu board high up behind it. The first thing you notice is that this is not a cheap place. The prices start at 5 bucks for a regular Chicago dog (probably because they actually fly in the Vienna Beef dogs from Chicago) and go up from there.

The “haute” (as in “high cuisine”) dogs are featured on the left-hand menu board. These haute dogs feature different kinds of sausages from the local-style Portuguese sausage to chicken to bratwurst. Those dogs range from 5.50 on up. 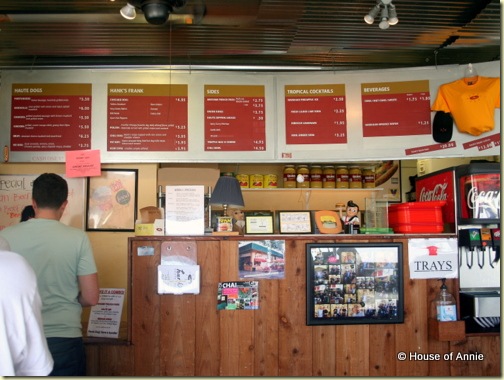 What really sets Hank’s apart, though are his Weekly Specials. Each day of the week, they feature a different sausage. It’s hard to say which one is the most popular but lots of people enthuse about the Lobster Sausage. Me, I think I’d want to try the Duck and Foie Gras sausage. 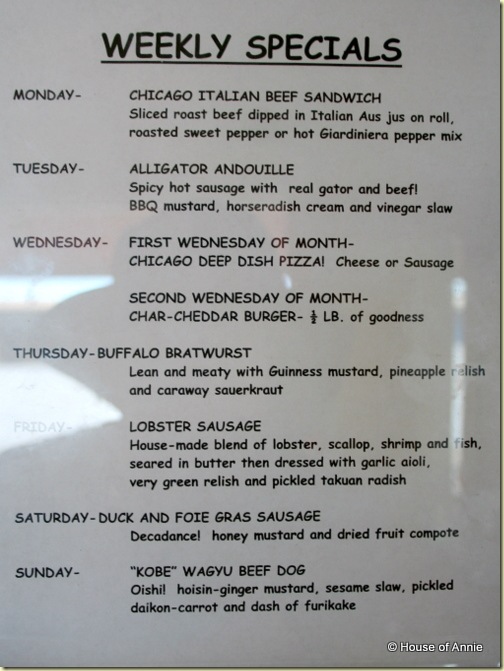 Since we were there on a Monday, we went with the Chicago Italian Beef Sandwich and some Truffled Mac-and-Cheese. We placed our order, paid (cash only, no cards!) for it and got our drinks. You have a choice to either sit inside on stools at a bar along the wall, outside under the canopy, or at picnic tables around the corner. We chose to sit indoors where we could read all the media clippings on the wall. 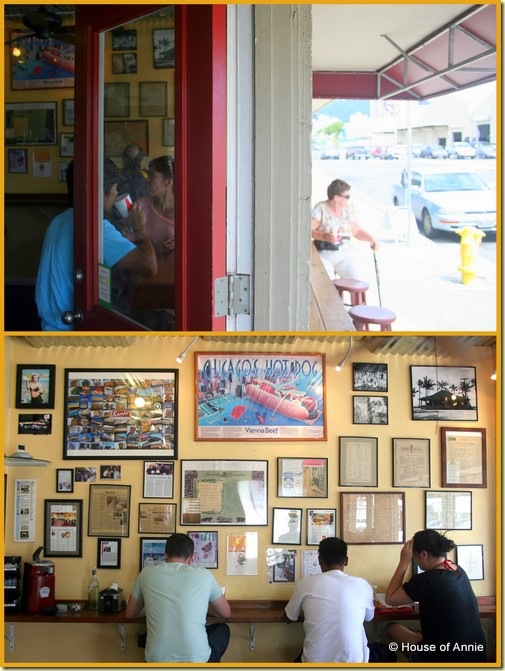 Our Italian Beef Sandwich arrived, wrapped in paper and nestled in a paper tray. The sandwich roll had some heft to it, as it was needed to hold the sweet Italian sausage smothered in thinly-sliced tender beef and juices and garnished with sweet peppers. It was very good! We devoured it in no time. 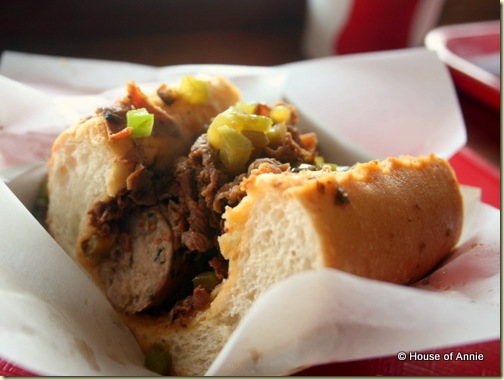 The Truffled Mac n Cheese was also good – not so heavy as the one we sampled at Alexander’s Steakhouse in Cupertino. The fresh-cut, double-fried Awesome French Fries were addictive. After finishing those off, we found that we still had a bit more room – the Italian Beef Sandwish wasn’t filling enough, I guess. So we ordered a ChiDog with the works – including the neon-green relish. 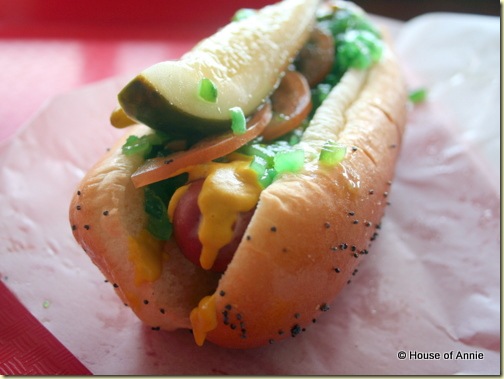 This was actually the first real Chicago dog I’ve ever eaten. There used to be a ChiDog place back in the South Bay when we were living in San Jose, but it closed down before we got a chance to visit. I’m sorry I missed it because this ChiDog was tasty! I love the dill pickle’s crunch and the “snap” of the beef frank as you bite into it. Like the Italian Beef before it, this dog was gone in a flash.

We had just enough room to left to order the crème brûlée for dessert. (Yeah, I know. What’s a hot dog joint doing serving crème brûlée? Well this is an haute dog establishment after all…) The crème brûlée was nice, but nowhere near as perfect as the one we enjoyed at Bistro Moulin in Monterey.

All in all, a good meal and a place I would want to visit again. Rating: 4 out of 5

Other reviews of Hank’s Haute Dogs by The Tasty Island, Straight Out of Kampung, Champuru, and The Fashionably-Forward Foodie

Stay tuned, as we’ve got yet another Hawaiian fine dining establishment to review. Subscribe now to receive our latest posts free to your email Inbox or RSS reader. Or join the fun and interact with us on our Facebook Fan Page and on Twitter as well!