Following my sister’s Hawaiian-style wedding reception, Annie and I had an intimate dinner for 2 at the venerable Alan Wong’s Restaurant to celebrate her 40th birthday. 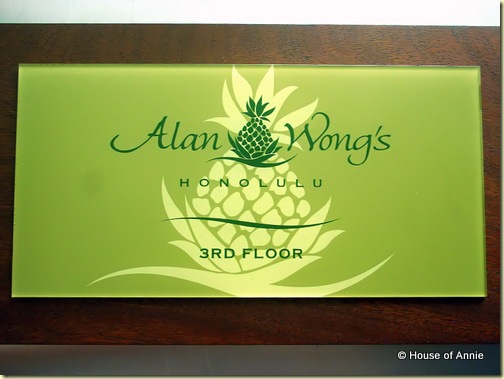 Alan Wong’s is one of the most recognised, award-winning fine dining establishments in Honolulu. It was noted as one of the Top 10 best restaurants in the nation by Gourmet Magazine in 2006. Presidents and chiefs of state dine there. Chef Alan Wong himself, credited as one of the founding fathers of Hawaii Regional Cuisine, garnered the James Beard Foundation award for Best American Chef – Northwest in 1996. It has a well-deserved reputation.

Annie has long wanted to go to Alan Wong’s but we never got the chance to during our previous trips back home to Hawaii. So when we started planning for this latest trip for my sister’s wedding, she made her wish very clear: “You better take me to Alan Wong’s!”

About a month before we left, I called them and made the reservation.

Alan Wong’s is not your typical fine-dining establishment. It is not located at the street level of a neighborhood known for fancy eateries. Instead, it is located in Mo’ili’ili, a working-class neighborhood east of downtown Honolulu, on the third floor of a non-descript office building.

When we stepped out of the elevator, however, we were warmly welcomed by the staff and shown to our table in the windowed room looking out over Mo’ili’ili. These tables were for the smaller duo and quartet parties, while the main dining room housed the tables for larger parties. The exterior room felt comfortably intimate whereas the interior room was busily boisterous. 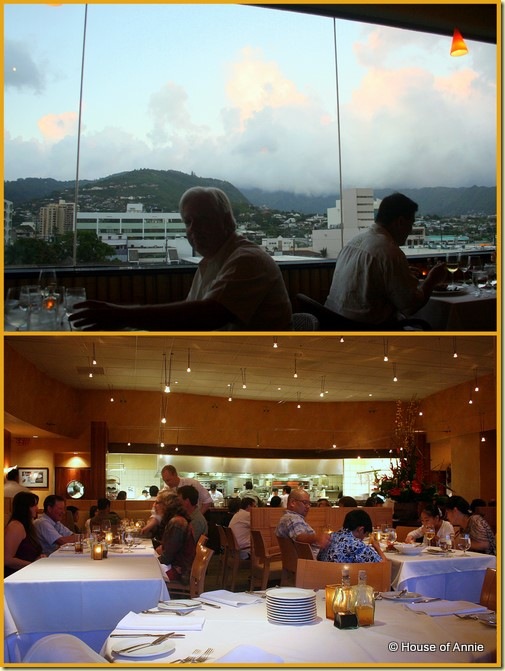 We were informed by the staff that some of our very dear friends from San Jose, hearing of the occasion, had banded together and bought us a gift certificate to Alan Wong’s, sufficient to cover our dinner that evening. That act of kindness totally blew us away! A dinner at a restaurant like this doesn’t come cheap, as evidenced by the menu (personally signed by all the staff): 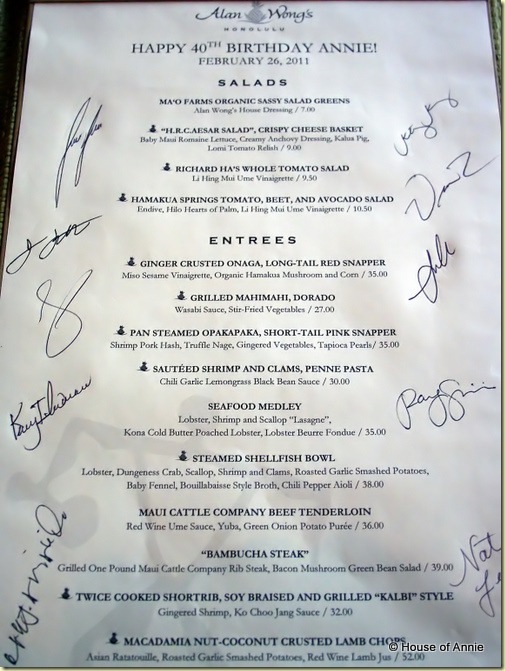 We decided to share the 5-course tasting menu and add a couple of extra appetizers to round out the meal.

Alan Wong’s shares the same “local and sustainable, farm-to-table” sentiments as other leading Mainland restaurants such as Chez Panisse and Manresa. One thing it cannot match, though, is “seasonal”, because Hawaii, being a tropical place, doesn’t have seasonal produce (unless you can call “got mango or no got mango” seasons). Still, there is a wide variety of ingredients available to work with, and the kitchen staff take pains to put out a top-quality dish that reflects the various cultures that make up Hawaii.

First to arrive was a grilled cheese sandwich made with kalua pig and mozzarella, sitting atop a parmesan crisp which was balanced over a chilled tomato soup. Alongside it was a plate of ahi poke. Each of the components individually were tasty and well executed. However we didn’t see how they worked together. 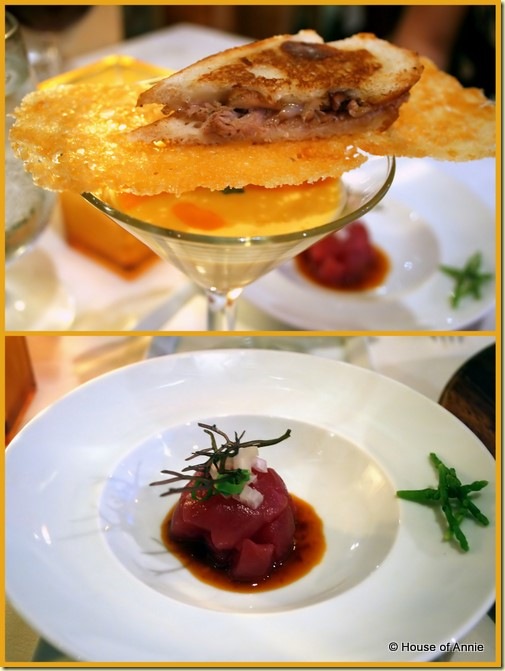 We had ordered a couple of opihi shooters which are narrow glass flutes containing opihi (limpets) with tomato water, fresh herbs, a grape tomato and an olive as well. Everything was on the salty side, save for the micro-shiso at the top. It was a bit difficult to eat because everything is jammed in and doesn’t slide out of the flute easily. We managed to maneuver the small opihi that was wedged into the bottom of the glass using the straw, but it wasn’t easy. 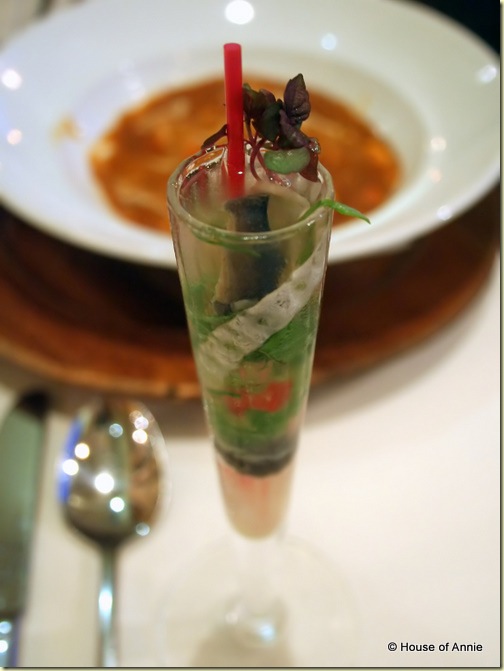 Next to arrive was the lobster bisque. This was a strange one. It was thick and hearty, almost like a stew. And it was missing something: lobster flavor. It wasn’t enjoyable.

When our salad arrived (“Hamakua Springs Tomato, Beet and Avocado Salad with Li Hing Mui Vinaigrette”), we dug in, expecting something like the salad we had at Chez Panisse. It wasn’t. I know, we shouldn’t compare one restaurant’s beet salad to another but still, one can’t help but reminisce about a good dish such as that one. One legitimate complaint we have about his salad is that the li hing vinaigrette is too strong – it overpowers the fresh flavors of all the component veggies. 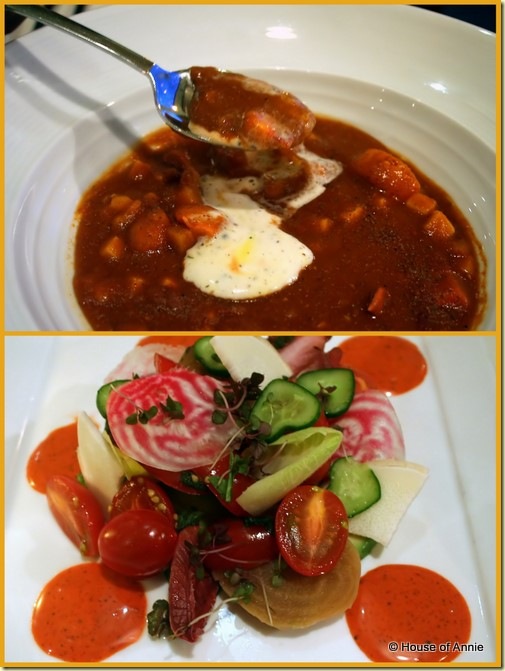 The Seafood “Lasagne” was very nice – pieces lobster, scallop and shrimp wrapped in a single lasagne noodle which was then filled with a cioppino sauce, topped with cheese and baked. We cleaned this dish up and pined for more.

Also good was “Da Bag” – an appetizer of clams and kalua pig, steamed inside a large foil pouch. It comes to you still wrapped, and the waiters then pierce the foil and unwrap the steaming hot dish. The clams had picked up some of the smokiness of the kalua pig, making them irresistible. 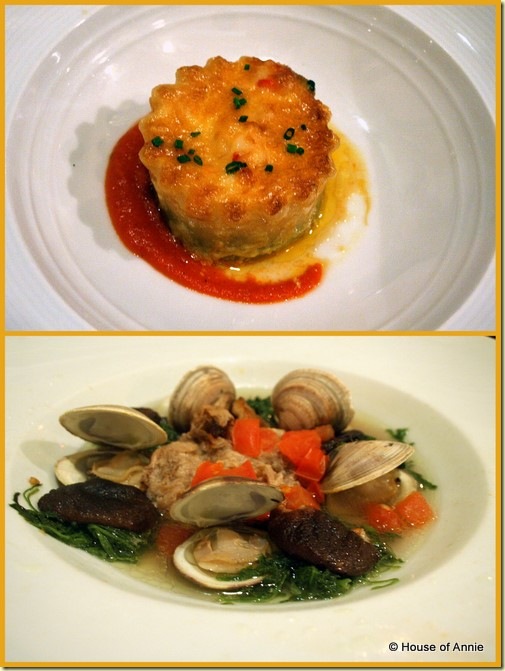 Finally, the main entrees arrived. The Ginger Crusted Onaga is one of Alan Wong’s signature dishes. It hearkens back to his Chinese roots, taking the flavors of steamed ginger chicken and marrying it into a panko crust. The fish is served atop some sweet Kahuku corn amidst a pool of miso-sesame vinaigrette. This was THE entree of the night, I would say.

Alan Wong’s version of “surf and turf” – a large shrimp sitting atop a twice cooked (braised and grilled) shortrib – was not so well done. The shrimp was cooked well, but the beef we thought had been overcooked. The meat was fall-apart tender, but tough and dry, and the kochujang sauce did not help. Too bad. 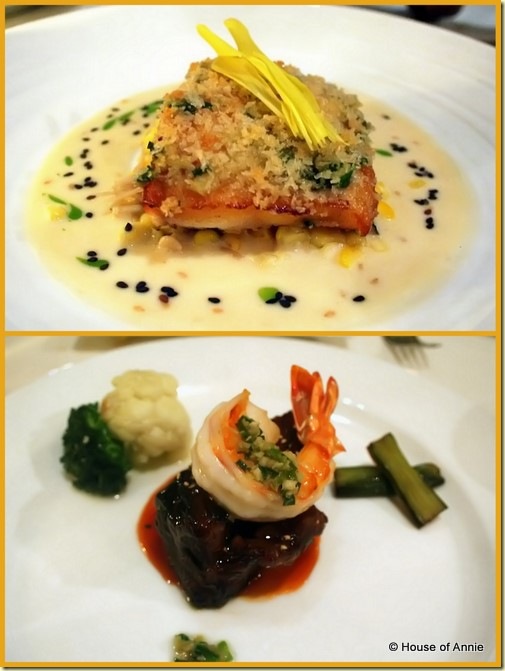 Annie ordered the Strawberries Romanoff for dessert, and that turned out to be the best dish of the night, and the dinner’s saving grace. Sweet Kula strawberries swimming in a strawberry-hibiscus soup, surrounding a delicious goat cheese panna cotta and topped with a wafer of white chocolate and goat cheese sorbet. Yum! 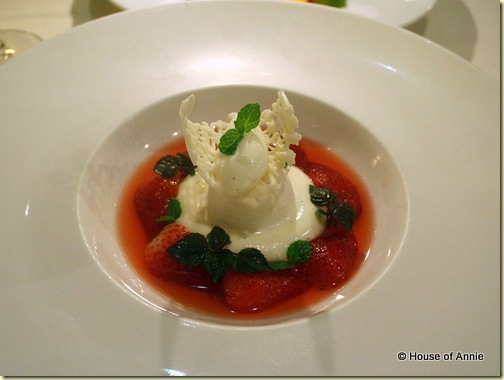 Of course, the staff had also prepared a special birthday-decorated dessert for Annie. It was coconut sorbet in a chocolate half-shell, designed to look exactly like a coconut, overflowing with fresh fruits. Also very nice. What we especially liked was that the staff obliged us when I requested they not sing “Happy Birthday” for everyone to hear (Annie was shy). 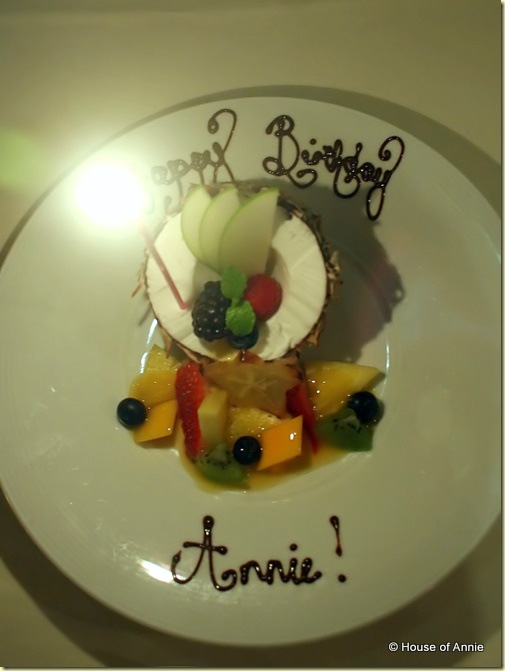 Adding it all up

Altogether, the bill came to over $140 including two glasses of wine and sales tax. This wasn’t as expensive as Manresa, Chez Panisse, or even Sushi-Man but we still feel like the food could have been a little better for the price. The service and staff were excellent, though.

The food was plated beautifully, but the flavors themselves didn’t sing. The dishes doesn’t make us want to go back. I think that the fact that Alan Wong’s can get the same ingredients year-round kinda leads to a complacency. Maybe if you’re not challenged to work with a new ingredient every month, you don’t feel the need to take a risk with the food.

But what do I know? Maybe I’m just a picky eater. Hundreds of other people would disagree with my assessment.

Have you been underwhelmed at a fine dining restaurant? Leave us a comment and share your story!

I’m only giving it 4 stars out of 5. Like Chez Panisse, I would go there once just to experience it for myself. But I wouldn’t go back. There’s just too many other chefs out there (like Chef Siu from Pah Ke’s in Kaneohe), applying their creative visions to local food, that also need to be tried.

Other reviews of Alan Wong’s by: Food Gal Carolyn Jung, Don George on Gadling, Cat at the Daily Dish, Arnold on Inuyaki, and Gigi-Hawaii,